Memorial services for Leland M. “Lee” Abben will be at 1 p.m. Wednesday at First Lutheran Church, Albert Lea. The Rev. Al Stoa will officiate. Interment will be in Hillcrest Cemetery. Military honors will be accorded by Albert Lea veteran’s organizations. Friends may visit from 5 to 7 p.m. Tuesday at Bonnerup Funeral Service, Albert Lea, and one hour before services at the church. 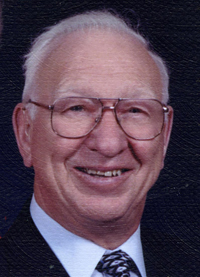 Leland died peacefully, surrounded by his family on Saturday morning, June 2, 2012, at Good Samaritan Society in Albert Lea. He was 86.

Lee graduated from high school in Northwood, Iowa, in 1943. Lee worked on the family farm for a short time before proudly serving our country in the United States Army during WWII. He served from November of 1944 until his honorable discharge in November of 1946. He had served in Italy, helped liberate the Dachau Camp, had opportunity to escort Gen. Mark Clark, and when the war was over he was an MP in the U.S. Army.

He was united in marriage to Betty J. Peterson on Aug. 26, 1950. To this union five children were born, Barbara, Lori, Christine, Garry and Jane, whom he loved so much.

Lee had worked for Wilson & Co./Farmstead/Farmland for 37 years before retiring in 1989.

He was a member of First Lutheran Church and the American Legion.

Lee loved his family and enjoyed all things centered around them. He looked forward to Saturday mornings when his kids and grandkids would gather for good conversation and coffee. Holidays with everyone together were very special times for Lee.

He enjoyed his friends at Health Reach where he faithfully went everyday to visit and exercise. Lee enjoyed camping, fishing, campfires, watching sports and talking politics.

Those waiting to meet him in heaven include his parents Ben and Bena; mother-in-law and father-in-law Laura and George Peterson; brothers: Kenny and Harold; sisters: Helen and Elda; brothers-in-law and sister-in-law: George and Murdy Peterson, Barb Armstrong, David Peterson, Thomas Peterson and Larry Gilderhus; and granddaughter Rachel (Abben) Beighley.

Our gentle, kind husband and dad is now surrounded by the arms of Jesus. Blessed be his lasting memory.