The memorial service for Lola Marjorie (Tillman) Partlow will be at 1 p.m. Saturday, June 23, at Johnson Family Funeral Home in Stuart, Iowa. The Rev. Ernie Bionoto will officiate. Interment will be in Rose Hill Cemetery, Menlo, Iowa. There will be no visitation prior to the time of the service. 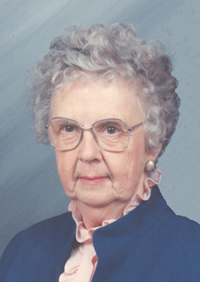 Lola was born in Clarion, Iowa, on May 22, 1916, the daughter of William and Minnie (Sellers) Tillman. She graduated from Clarion High School in 1935. She attended Iowa Business College in Des Moines, Iowa, and then worked for Bankers Life Insurance Company. She married Merritt Partlow on Feb. 5, 1938, in Princeton, Mo. They had three children: Constance, James and Deborah. Throughout their married life they lived in a number of communities in Iowa, Minnesota and South Dakota; most recently in Albert Lea. Lola worked in retail management a good part of her life, lastly with Herberger’s department store in Albert Lea and Watertown, S.D. Upon retirement she joined the docents of the Mellette House (home of South Dakota’s first Governor) in Watertown, S.D., a living history museum. While living in Watertown she enjoyed working with county extension services on various projects. Through her life she was an avid seamstress, enjoyed quilting, loved to read and cherished the time she spent with her family and friends

Lola is preceded in death by her husband Merritt; her parents; her grandson Corey Goodnature and son-in-law Richard Davis and brother Kenneth Tillman; sister Vera Robinson; brother and sister-in-law: Howard and Betty Smith and Bill and Mavis Partlow.

Lola will be greatly missed by her family and friends. Blessed be her memory.