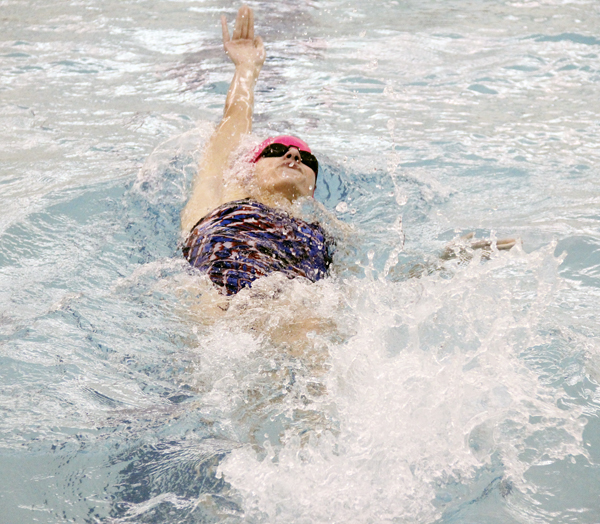 When Lindsey Horejsi was in fourth grade, her teacher, Mark Nechanicky, asked his students where they thought they would be in 10 years.

“In the Olympics,” Lindsey replied. “And I will send you a postcard.”

“I believe I will get it,” Nechanicky told her.

Now having completed eighth grade, Lindsey, 14, has made the cut for the Olympic trials in Omaha, Neb., on June 26. 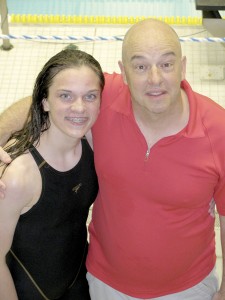 Lindsey Horesji, an eighth-grader and swimmer from Albert Lea, stands with her coach from Faribault, Mark Vininski. -- Submitted

She swam a time of 1 minute, 11.95 seconds in the 100-meter breaststroke at the Jump Into June meet at the University of Minnesota Aquatic Center in Minneapolis last weekend.

The Olympic trials qualifying time is 1:12.19. Lindsey is ranked third in the nation for her age group.

“I didn’t think I would be this close at this time,” Lindsey said. “Not in eighth grade.”

The Jump Into June meet was the second long course competition of her career. In a long course competition the pool is measured by meters instead of yards, so she does not have to turn as many times as in a yard pool. The university’s pool is Olympic-sized, which is two and a half times the size of the Faribault and Albert Lea pools that Lindsey has been training in.

“It was amazing to watch her,” Mark Vininski, the head coach of the Atlantis Federation swim team, said. “She did everything she had to do to make it.”

What began with swimming lessons at the Albert Lea city pool became training for the 2016 Olympics.

In January, Lindsey started training in Faribault with Vininski.

At first she only swam two days a week there, but as the Olympic trials got closer she started training in Faribault five to six days a week.

“This is my life,” Sue Horejsi, Lindsey’s mom said about driving her to all of her practices and meets. “Once the kids go to college it’s never the same. I enjoy watching Lindsey, and I know the housework will always be there, but she will grow up.”

Lindsey’s family is behind her with training for the Olympic trials. Lindsey said her grandparents are her role models and are very supportive of her.

“Lindsey’s parents are very helpful and back her up with swimming, which helps a lot,” Vininski said.

When she was younger, and swimming with the Tigersharks at the Albert Lea Family Y, Lindsey was as dedicated to swimming as she is today. She would always go down to the pool long before she needed to, waiting for when it was her time to get in the water, Sue said.

When Sue asked her why she headed down to the pool so early, Lindsey said she was thinking about how she was going to swim.

“When she is swimming, she is so focused,” Sue said. “She doesn’t see anything around her.”

Lindsey swims with the Albert Lea Tigers during the fall but with Atlantis during the spring. She used to participate in track and field but gave it up this year so she could devote more time to swimming and making the Olympic trial cut.

Lindsey is also in dance and has found time for dance three days a week along with swimming two to six days a week.

Dance has given Lindsey’s swimming style grace. She swims fast enough that she is breaking school records, but with more elegance than most swimmers.

“When she swims, it doesn’t even look like she is working hard,” Vininski said.

One week later she broke her own 200-yard individual medley record with a time of 2:12.87.

That same evening, Lindsey broke the school record for the 50-yard freestyle and the 100-yard breaststroke.

“Setting a record is an accomplishment any athlete should feel proud about achieving. Having it stand for 30 years was very surprising. I expected it to be broken many years ago,” Bergo said.

“When Lindsey sets her mind to something she works to achieve it,” Albert Lea High School swim coach Jon Schmitz said. “She is the most talented swimmer I have coached and has a drive very few athletes have.”

From a fourth-grader who told her teacher she would be in the Olympics in 10 years, to an eighth-grader making the cut for the Olympic trials, Lindsey is making her dream come true.

“I think she will get there,” Nechanicky said.