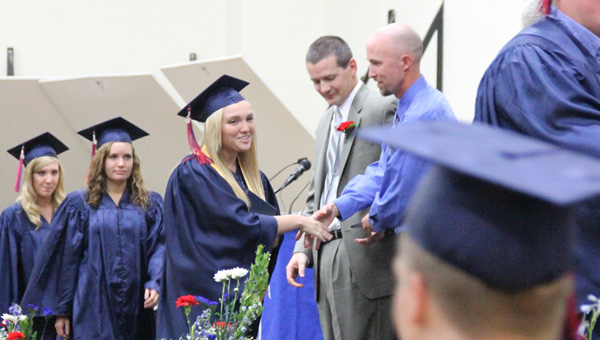 Never give up — that’s the theme two seniors gave to the rest of their graduating class Friday evening at Albert Lea High School’s commencement.

The speakers were Griffin Wangen and Annabell Randall; they were chosen by their classmates to address the crowd at the 128th annual commencement ceremony. The two wrote the speech together, and Randall said they both agreed that never giving up would be a good sentiment. 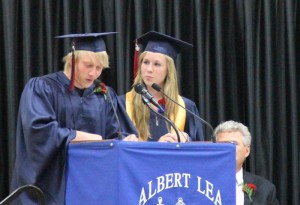 “We also tried to incorporate a lot of people and memories of our class,” Randall said.

They reminisced about being nervous the first day of high school and about the sudden addition of eighth-graders to the high school in their last year. They compared the highs and lows of high school to that of real life, and agreed that the class should never give up.

“Isn’t that what we all need? An attitude that we’ll never give up?” Wangen asked the seniors.

The two also thanked all the parents in the crowd for all the support they give, and the graduating seniors all turned around and gave a standing ovation to their parents.

“A new chapter of our life is about to begin,” Randall said.

Wangen, who’s been involved in baseball, football, hockey, soccer and cross country, said he feels prepared for the next step in his life. He’ll be attending Minnesota State University, Mankato, in the fall. 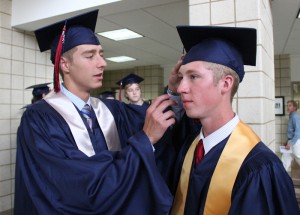 Randall plans to attend Oral Roberts University in Tulsa, Okla., this fall to study elementary education. Her mom, Melody, said she’s proud of Annabell. Since Annabell is the Randall’s youngest child this was the last commencement they’d attend, but Melody said she didn’t feel sad, just happy for Annabell.

“I couldn’t think of too many things I’d want to change about her high school career,” Melody said.

Just before 7:30 p.m. all the graduates were milling about the hallways, while the audience waited in the gym to see the grads in the processional. Seniors Evan Templeman and Brady Falk said they’re excited to move on.

Falk will be attending Arizona State University in the fall, and Templeman will be headed to the University of Minnesota, Twin Cities.

The first to address the graduates was high school Principal Al Root, who introduced special guests Kathie Lein, the district’s Teacher of the Year, and teacher Jim Haney, who had just won the state history teacher of the year award. 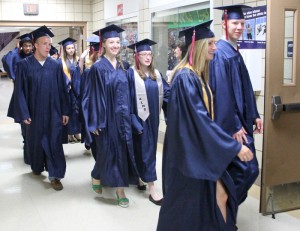 Then Mark Ciota, school board vice chairman and proud dad of senior Morgan Ciota, addressed the graduates. He said in medical training he’d been told someone has to hear something seven times for it to stick, and throughout his speech he kept saying: “Everything you do from this point matters.”

Ciota also explained that while the graduates have a bright future ahead of them, that previous generations have left a mess of things that they’ll be expected to fix.

“We’re counting on you,” Ciota said.

After Ciota’s speech the Albert Lea High School Concert Choir sang “In My Life” and “How Can I Keep From Singing,” directed by Diane Heaney with accompaniments by Robert Tewes on piano, Suzanne Mauer on oboe and Rebekah Crissinger on violin.

Then Superintendent Mike Funk spoke to the seniors saying he doesn’t get the opportunity to teach much anymore so he enjoys the time he gets to speak at commencement each year. He then told the crowd about a challenge he and a group from Albert Lea recently completed — the Tough Mudder. The challenge is an obstacle course, and Funk compared it to the obstacles that seniors will have in their lives. He told them they’d be successful in life’s journey if they gave help and asked for help from others.

“You are going to be faced with a series of obstacles,” Funk said. “Remember you are not alone.”