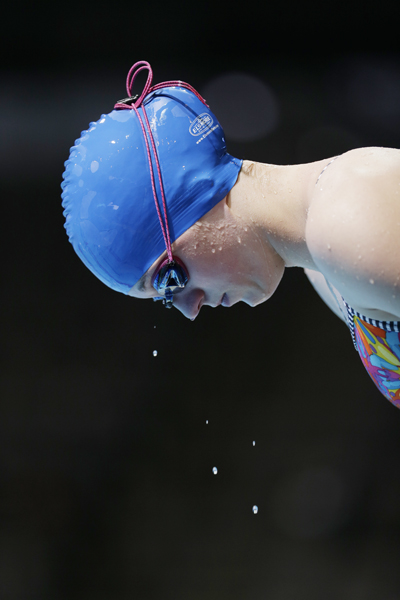 Water drips down from the face of Lindsey Horejsi, 14, of Albert Lea, as she takes a position on a starting block during practice at the U.S. Olympic swimming trials Sunday in Omaha, Neb. The trials started on Monday. -- Mark Humphrey/AP

OMAHA, Neb. — An Albert Lea swimmer didn’t make the Olympics, but she did post one of her best times.

Fourteen-year-old Lindsey Horejsi swam in the 100-meter breaststroke swimming trials in Omaha for the 2012 Olympics.

Horejsi went to the trials seeded in 128th out of 153 competitors.

After swimming a time of 1 minute, 12.48 seconds in the 100-meter breaststroke on Tuesday, Horejsi did not advance to the finals, but did improve her time so she finished 88th.

“It was the second best time I’ve swam in a meter pool,” Horejsi said. “I’ve only swam in meters five times.”

Horejsi said now that she has an idea of how tough the competition is, she’s going to keep training for the 2016 Olympics that are set to take place in Rio de Janeiro.

Vininski is a coach for the Faribault Atlantis Swim Federation and has been coaching Horejsi since January.

“I like to believe only the paranoid survive,” Vininski said. “There’s always something we can do better on. I’m not going to rest. We’re going to keep talking to the big name people and we’re going to strive to do better.”

Horejsi said when she was at the trials she focused on doing well and keeping her time consistent.

She said for next time she needs to get used to swimming in meters and practice a faster turnover.

“I think I can do it if I dedicate more time and practice more,” Horejsi said.

She said it was a learning experience hearing people talk about her was exciting.

“When I went up on the blocks, it was like ‘oh my gosh this is happening,’” Horejsi said. “It was exciting and overwhelming. To see the best of the best in swimming competiting was pretty cool.”

Vininski said he has never coached anyone before Horejsi that has made it to the Olympic trials but has made goals to bring more.