Memorial services for Patricia Jean Johannsen, 73, of Albert Lea, will be at 11 a.m. Saturday at St. Theodore’s Catholic Church. The Rev. Timothy T. Reker and Deacon Mike Ellis will officiate. Interment will be at St. Theodore’s Cemetery. Visitation will be one hour prior to the service at the church. To sign the guest book, go to www.bayviewfuneral.com. 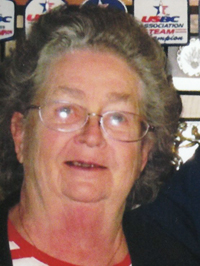 Patricia Jean Johannsen was born on Jan. 22, 1939, to Raymond and Iona (Kirch) Cashman in Mankato. She grew up in Albert Lea and graduated from Albert Lea High School. She then attended St. Marys School of Nursing. On Sept. 3, 1960, Patricia was united in marriage to Darroll Johannsen at St. Theodore’s Catholic Church. Through the years, Patricia had been an active member of St. Theodore’s and worked as a cook there and at the American Legion. She was a member of the American Legion Auxiliary where she had served as a past district president. Patricia also served on the board of directors for the Big Island Rendezvous and was a past president of the bowling association. Patricia had a giving heart and enjoyed helping anyone in need. She enjoyed volunteering and was honored with being named the 2011 Freeborn County Senior Volunteer of the Year. She was also an active volunteer for the Red Cross, Girls State and the Freeborn County Bike-A-Thon. Patricia was an avid bowler and was the first woman in Albert Lea to bowl a 300 game. She also enjoyed reading; cooking and especially loved attending her grandchildren’s sporting events. Her kind and generous spirit touched many lives and will be truly missed.

In lieu of flowers memorials are preferred to hospice of Albert Lea, Big Island Rendezvous Education Days or the Freeborn County Relay for Life.