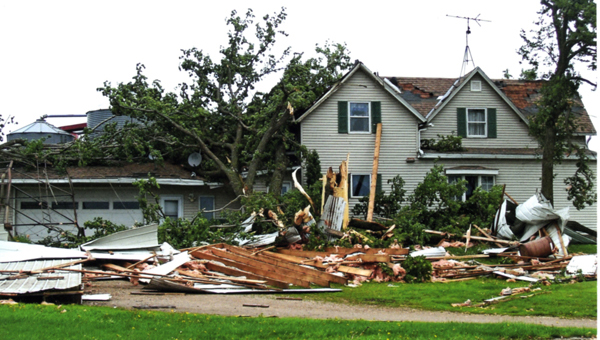 The farm house still stands even with all the tornado rubble around it. Kuethe said it was hard to see her home so damaged. -- Submitted

Though Ada Kuethe knows the dangers of bad weather, she doesn’t get shook up when she sees clouds rolling in. She just makes sure she knows where her car is. 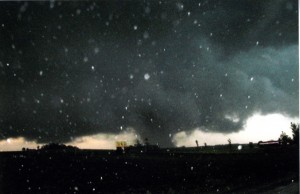 A large funnel cloud forms along the horizon in 2010. Kuethe took this photo from her daughter’s home in Conger.

“I’ve learned to be a survivor,” Kuethe said.

Kuethe was one of many survivors of the deadly June 17, 2010, tornado outbreak in Freeborn County. In an interview with the Tribune last week, the 1957 graduate of Albert Lea High School recalled the events of that hot and humid Thursday two years ago.

Kuethe, now 73, was with her daughter, Lori Ladwig, at her home in Conger at the time of the tornado. Ladwig heard the warnings and called her mother to come stay with her because Kuethe was unable to go into the basement of her own home because her stairs were being redone. Kuethe recalls standing outside with her son-in-law, Wayne Ladwig, watching the storm clouds move in. As the weather worsened, the three moved down to the basement and laid under some tables. The next morning, after the weather died down, they went out to Kuethe’s house to see if anything had happened.

Ladwig remembers her emotions as she drove her mother’s pickup over wires and other tornado debris that was strewn across the gravel road.

“The devastation was unreal,” Ladwig recalls.

When they approached the farm site 1 1/4 miles west of Armstrong, the two women had a hard time assessing all the damage. The hog house was gone, the machine shed was completely taken out, the bins were caved in from excessive winds, and there was a tree and windmill that had fallen through the house roof. Luckily, Kuethe’s camper had been at her daughter’s house in Conger. If it had been in its usual spot next to the house, it would have ended up inside the house. 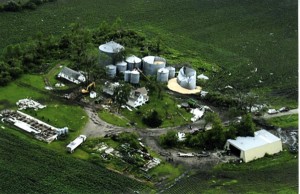 An aerial view of the Kuethe farm site is taken from a helicopter. Former Gov. Tim Pawlenty flew around Freeborn County and surveyed the damage after the tornadoes.

“The house looked almost twisted,” Kuethe said as she described the appearance of her home upon first glance.

There were siding panels, branches, insulation and boards strewn all over the yard. Her car had been parked inside the garage and was shook by vibrations. The trunk was also smashed and had to be replaced. She was grateful that it had just been her border collie, Baily, and two horses on the farm at the time of the tornado and that they were unharmed.

“I’m just glad none of my personal possessions were lost,” Kuethe said. “And nobody got hurt; that was the main thing.”

The cleanup was more than extensive. Kuethe and Ladwig drove around in Kuethe’s John Deere Gator, picking up sticks, boards, rocks and other objects from the fields. Highway patrolmen had to come out to direct traffic on the gravel roads because of the heavy traffic trying to get through.

Luckily, there was an endless stream of volunteers who came out to Kuethe’s house to help with restoration. Several people came from Albert Lea, Conger and other surrounding communities to walk the fields and pick up debris. Kuethe’s sons-in-law patched the roof and put tarps over it to try to prevent more water from coming in. The new carpet in the house had to be completely ripped out, and new bins were put up at the other end of the property. The Glenville and Albert Lea departments assisted in the cleanup as well. The American Red Cross brought sandwiches and water that were put in coolers because there was no electricity. She received state aid as well.

“There were many people that I didn’t even know,” Ladwig said. “It was wonderful.”

Volunteers weren’t the only ones to make trips out to the site. KARE 11 of the Twin Cities did a TV interview with the Kuethe family on the after effects of the tornado. KIMT also interviewed Wayne Ladwig and Gayle and Vicki Kuethe about the damage. 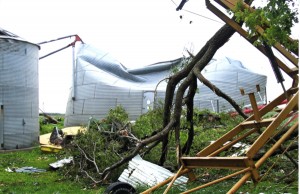 The sides and top of a grain bin are caved in and a tree is toppled after a tornado struck the Kuethe farm on June 17, 2010. Kuethe’s sons-in-law had to rebuild bins after they surveyed the damage.

Kuethe stayed with Ladwig for five months after the storm made her home uninhabitable. A semi transported Kuethe’s belongings from her former home to Ladwig’s Conger residence. Kuethe now resides in a house on Canary Drive in Albert Lea.

“It’s been an adjustment getting used to living in town and in a split-level house, but it’s nice to have neighbors that I know right on my street,” Kuethe said.

Unfortunately, the farmhouse had to be burned down due to mold from excessive water damage. The Alden, Conger, and Freeborn fire departments did the job in fall 2011 as a training exercise burn. She and her late husband, Ronald Kuethe, had shared the house since they were married in 1957 for 50 years before he died in 2006 from a massive heart attack. Kuethe said it was hard to watch a house that had been in the family since 1894 be destroyed.

“If the insurance company had come and surveyed the damage earlier, that wouldn’t have had to happen,” Ladwig explained.

Two years later, Ladwig admitted that she has been even more alert whenever bad weather is a threat.

“I always call Ada and make sure she knows about it,” Ladwig said.