The funeral service for Robert Eugene Ellingson of Albert Lea will be at 11 a.m. Monday at East Freeborn Lutheran Church, rural Albert Lea. The Rev. Matthew Griggs will officiate. Interment will be in the church cemetery. Visitation will be from 4 to 7 p.m. Sunday at Bonnerup Funeral Service Chapel, Albert Lea and one hour before the service at the church. 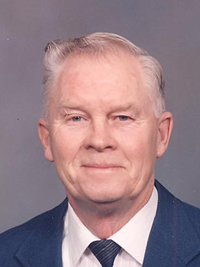 Robert was born Sept. 21, 1929, in Albert Lea, to John and Sarah (Jerdee) Ellingson. He attended Manchester Grade School, Bell School and then Albert Lea High School graduating in 1947. Robert lived in Manchester until the age of 7. In 1937 his family moved to a farm northeast of Hayward where he resided until 2008 when he moved to Albert Lea. Robert was baptized at West Freeborn Lutheran Church and confirmed at East Freeborn Lutheran Church where he belonged and was a former trustee. He had been a member of the Elks Club and the Eagles Club and served on the Clarks Grove Creamery Board and on a committee for the ASCS office. After his retirement from farming, Robert enjoyed playing golf with the guys at the Senior Golf League and going out with friends for coffee. He also enjoyed playing cribbage and pool at the Senior Citizens Center. Robert enjoyed playing cards with family and friends. Robert enjoyed fishing in the summer with his family and ice fishing in the winter with his friends. His family was very important to him and he was very proud of his children and grandchildren. For 12 years, Robert and Bernice had enjoyed spending the winter months in Lake Havasu, Ariz.

Robert is preceded in death by his parents: John and Sarah Ellingson; and a grandson in infancy.

In lieu of flowers, memorials are preferred to either East Freeborn Lutheran Church or Crossroads Community Hospice.