Round four of the NJCAA Divison III national tournament finished friday in Chautauqua, N.Y.
Minnesota State-Fergus Falls won the championship with a four-day total of 1,224.
It was the first championship in school history. The Spartans were undefeated for the season.
The host school, Jamestown College, lost to the Spartans by 18 shots.
Albert Lea graduate Tyler Brackey tied for 38th overall in the individual competition.
He shot an 86 on Friday. 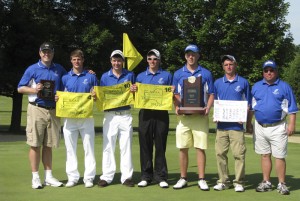 “It’s been an honor to coach Tyler for two seasons,” Spartans coach Jason Retzlaff said.
“He is a great player, but an even better young man. Our team wouldn’t have been able to accomplish this without him.
The tournament took place at Chautauqua Golf Club.
The Spartans’ win ended a streak of three consecutive championships by Monroe Community College.