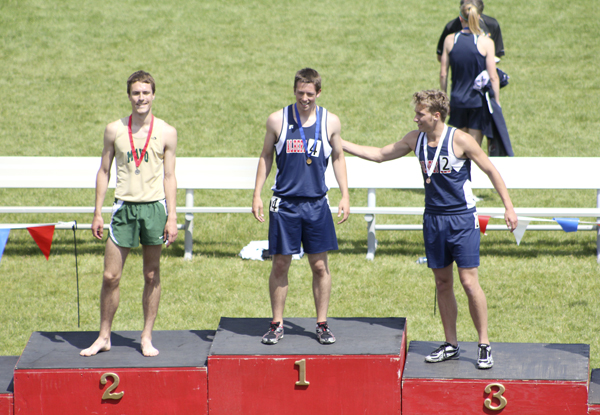 Tigers senior Isaac Staat became the third person to earn a trip to state for Albert Lea at Saturday’s meet in Lakeville.

Staat finished the 800-meter run in 2 minutes, 1.38 seconds and said the second place person was less than a second behind him.

“I was really happy and smiling a lot,” Staat said.

Staat said this will be his second trip to state. The first time he went was last year when he was living in Washington.

He said making it to state this year was a goal of his because it was a lot easier to get there in Washington.

He said now his goal is to make it to finals at state or run under two minutes.

“I appreciate Sean a lot,” Staat said. “He’s worked hard all season and I feel like I couldn’t have done it without him. He pushed me to my limits to get me where I am.”

Tigers coach Kevin Gentz said Staat ran a personal best time in preliminaries on Thursday with a time of 2:00.96. His second best time was his state qualifying time.

“He ran a great race,” Gentz said. “It was a close finish and for awhile it appeared that Sean would join him at state with a second-place finish, but was edged out in the last 20-meters by another runner.”

Gentz said Staat was voted most valuable by his teammates.

“It’s very exciting,” Staat said. “I don’t really remember races like that very well because it’s in the moment. I’m really tired, but I don’t recognize it because my adrenaline is racing.”

Staat joins Bryce DeBoer and Chrissy Monson in the Tigers trip to state.

The state tournament is being held at Hamline University in St. Paul.

For more results from Saturday’s meet, see the scoreboard.