The park in Park Avenue 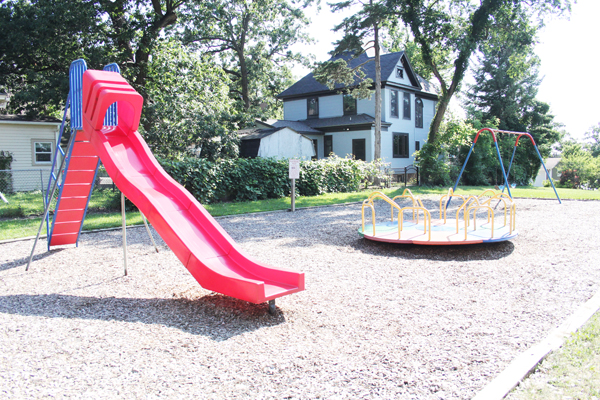 The slide, merry-go-round and swings at Park Avenue Park were installed in 1999 and previously had been at Lakeview Elementary School. -- Danielle Boss/Albert Lea Tribune

One Albert Lea neighborhood, along with several local businesses, are coming together to make one city playground safer and more inviting.

Park Avenue resident Jodi Schulz, an obstetrician at Mayo Clinic Health System in Albert Lea, said she and some others in the neighborhood first started talking about ideas for Park Avenue Park last summer.

They went to their Albert Lea City Councilor Larry Baker, who in turn connected them with the Parks & Recreation Advisory Board. 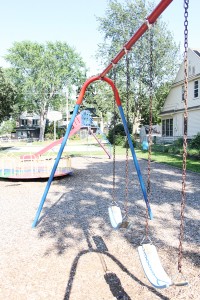 Tighter budgets mean its hard for the city to update playground equipment.

“We have such a diverse range of kids in the area,” said Schulz, who has three children herself. “A lot of people want open space so there can be football or soccer, but the younger ones want climbing stuff and slides.”

She estimated there are between 30 and 50 children in the Park Avenue peninsula, which juts into Fountain Lake next to the hospital.

After meeting with Parks & Recreation staff, she said the decision was made that if the group could come up $6,000, the city would pay for the remainder of the cost of the play equipment and provide the labor to install it.

Albert Lea Parks & Recreation Director Jay Hutchison said the current playground — a slide, a merry-go-round and some swings — was installed in 1999. The equipment was used and had come from Lakeview Elementary School.

In a letter to her neighbors this week, Schulz said the goal is to “purchase a playground set that will decrease the overall footprint of the play area and increase the open area for sport play.”

So far, about $3,000 has been raised, thanks in part to donations of more than a dozen businesses.

This week, the families in the neighborhood have been asked to make a contribution to the cause.

“While the park is city property and open to all, it will mostly be used by children and grandchildren within the neighborhood itself,” Schulz said. “With the tight city lots and hilly lakeside terrain, the park is one of the few flat open spots nearby for kids to run and play.”

Hutchison said he is hoping to install the new equipment yet this year.

“It’s a good thing especially with these neighborhood parks if people can do fundraising,” Hutchison said. “With tough budgets it’s hard to get playground equipment in.”

If people wish to donate, they are asked to write their checks to the Albert Lea Chamber Foundation and include “Park Avenue Park Project” on the memo line.

The Albert Lea-Freeborn County Chamber of Commerce has created a development fund to allow donations to be tax deductible.