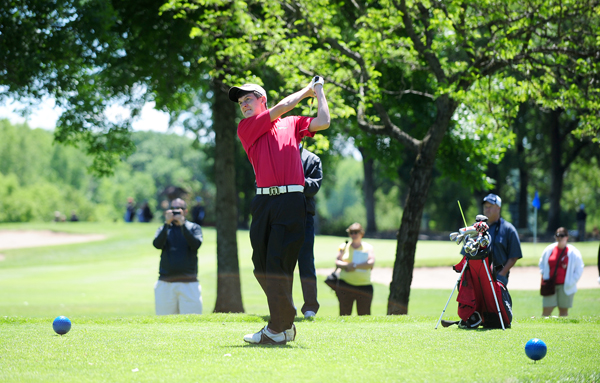 Colbi Bullerman tees off from No. 1 hole at Pebble Creek Golf Club in Becker on Tuesday. Bullerman shot a 92 for the day. -- Brandi Hagen/Albert Lea Tribune

BECKER — Eighth-grader Nick Neubauer pulled a trick out of his golf bag on Tuesday at Pebble Creek Golf Club by leading the United South Central boys’ golf team to a first-place finish for the first day of the state golf tournament.

Neubauer was the Rebels’ No. 3 golfer before the day started, and after 18 holes in the wind, he led the team with a score of 80.

“It was a big surprise Nick was the low guy today. He did really well,” Rebels coach Brad Huse said. “He was never in trouble, and that’s what you need in the state tournament.”

The course at Pebble Creek has a par of 72.

According to Huse, the boys’ team has never had a state golf title, and the last time the team advanced to the state tournament was in 2003, its first state appearance in school history.

Huse said the boys’ performance improved as they moved onto the second round and the wind died down.

There are no seniors on the team. Neubauer and Ryan Pederson are both eighth-graders, Nate Pederson is a ninth-grader, Olson is a sophomore and Bullerman and Ulrich are juniors.

The leading golfer of day one was Cordell Weber, a sophomore from Martin County West, with a score of 71. The USC team is leading the tournament by two strokes with a score of 327.

The team started day two at 12:25 p.m. today with Ulrich as the first golfer to tee off.