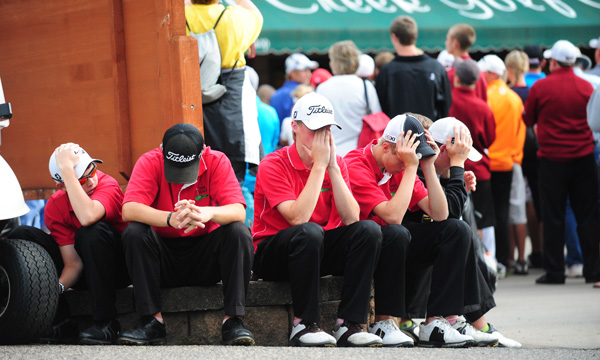 The Rebels hang their heads while other schools and individual athletes are given awards at the Class A state tournament on Wednesday evening. - Brandi Hagen/Albert Lea Tribune

BECKER — As the scoreboards were updated Wednesday evening at Pebble Creek Golf Club the tensions were rising.

After the first day, the team had a two stroke lead over Legacy Christian Academy, but as events unfolded in the last hour of the tournament, the Rebels sat down with their heads in their hands.

“It’s tough. It really is,” Rebels head coach Brad Huse said. “We tell the kids at day one and after every time how important it is to know the score and know the scorecard that you’re signing and that it’s right.”

The team was crushed as it dropped from a potential second-place win to fifth place.

Without the discrepancy the team would have scored a 327 for day one and 326 on day two for a tournament total of 653. The total would have been eight shots more than Legacy Christian Academy who took first with 645 and 10 shots less than Wabasha-Kellogg that was awarded second with a score of 663.

Instead, the Rebels were given a total of 671 for the tournament.

“The kids are very upset,” Huse said. “They have tears down their faces.”

Before the devastating results, the Rebels had a good day on the course.