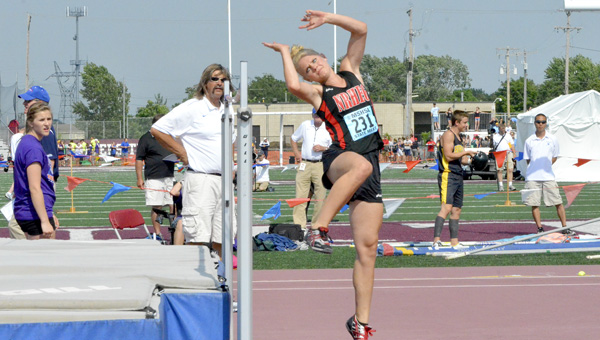 ST. PAUL — “When I woke up Saturday morning, I text her and said, it wasn’t a dream, you are state champion,” New Richland-Hartland-Ellendale-Geneva track and field coach Duey Ferber said.

Ferber was referring to Panther sophomore Carlie Wagner and her high jump performance at the Minnesota State High School state track and field tournament that won her the Class A state champion title on Friday.

Ferber and Wagner said the game plan was to make sure her jumps were clean because at the state level, whoever makes the highest height first wins, despite any prior misses.

Wagner jumped 5 feet, 6 inches and the defending state champion from Caledonia, Emma Lange did the same, but she missed the next height.

“I was just pacing around waiting for her to do the last jump,” Wagner said.

Wagner said Lange was intimidating with her tall and slender build and her good form.

“I just trudged through it, I guess,” Carlie said. “It made me try even harder because she was a state champion.”

Expecting there to be a lot of good jumpers working at their fullest potential Wagner said she never imagined winning. She figured she would place third or fourth, with a slim chance at getting second. Instead, Carlie took first and tied a personal record.

“It was incredible,” Wagner said. “I was in shock for 20 minutes after. It hadn’t hit me yet.”

Wagner said the second she knew she won she turned to Ferber and started crying.

“I was crying like a little baby. It was so much emotion that it just hit me,” Wagner said.

Ferber said he has been coaching the track and field team for 23 years and has been after a gold medal since.

Wagner said with a successful basketball season and a successful track and field season she has goals now to make it to state more in the years to come.

As a sophomore she said she is really happy that her hard work has paid off.

Wagner made her first trip to state last year, but placed fifth.

She said this time there wasn’t all the pressure and wondering of what was going to happen.

She said the pressure was on with a full crowd surrounding the high jump, though.

“I could hear my parents the whole time I was jumping,” Wagner said. “That gave me a little more push.”