Funeral services for William G. Beiser, 88, of Conger will be held at 10:30 a.m. Monday at First Baptist Church of Clarks Grove. The Revs. James Cameron and Horst Hehr will officiate. Interment will be at Conger Community Cemetery. 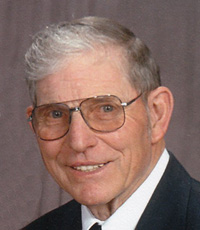 Visitation will be from 4 to 7 p.m. today at Bayview/Freeborn Funeral Home and one hour prior to the service at the church. To sign the guest book, go to www.bayviewfuneral.com

William died peacefully on June 13, 2012, surrounded by his wife and family at the Methodist Hospital in Rochester following a reoccurrence of cancer.

William G. Beiser was born on the family farm near Kiester, May 15, 1924, to John and Rosa (Schwieder) Beiser. He attended the “Gravel Pit” country school southeast of Kiester. Following his discharge from the Army Air Force in the fall of 1945, he attended Agriculture College at the University of Minnesota, St. Paul campus. He graduated in 1949. He married Phyllis Hamilton of Tracy in May of 1950. They moved to his mother’s home farm, “The Schwieder Farm” near Conger, which he actively farmed until his death. The couple was blessed with six boys and one girl. William spent the rest of his life there, happy and content with his good neighbors in the community. Phyllis died in 1977. William married Marvel Hanson Draayer in May of 1988. He often shared that God had blessed him with two wonderful girls with which to enjoy life. William was a charter member of the St. Paul Lutheran Church and served on the Conger Community Cemetery Board until 2010, nearly all of his adult life. He was an avid stamp collector; William loved life and enjoyed the time shared with his family, neighbors and friends. Blessed be his memory.