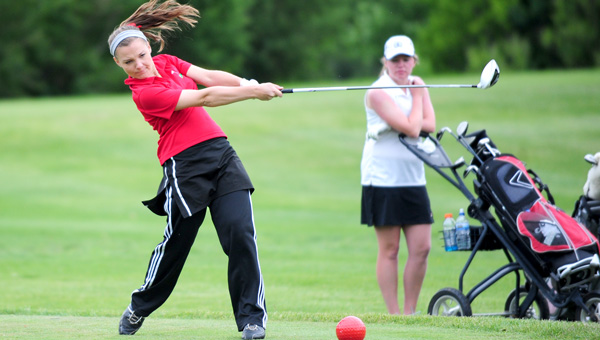 BECKER – “Her dad has had more jitters than she has,” Cindy Wood said.

Ali, a junior at United South Central, moved up the ranks with her day two performance. After the first day she was sitting in 10th place, but surpassed her goal for the tournament of making the Top 10 on the second day. She tied for fourth place in the Class A competition.

“She was right up there with the other top girls in the state,” Rebels head coach Brad Huse said. “She keeps it in the fairway, she has a good short game and her putting was on this week. That’s what it takes if you want to finish high.”

The 2012 tournament was Ali’s fourth trip to state. 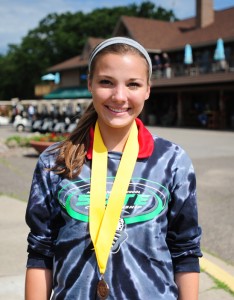 “I think her experience showed,” Cindy said. “I don’t think she felt the pressure as much. She knew what her goal was and that it was achievable.”

Ali shot an 80 on Wednesday for a tournament total of 167. She was six strokes off from the first place winner, Rachel Gray, from Legacy Christian Academy. She was only one stroke off from the two second place winners.

“Every year she’s been up here she’s improved,” Huse said. “From last year’s finish of 12th to a tie for fourth was great. She was dead on today.”

After struggling on the back nine on Tuesday, Ali said she was determined to do better.

“I felt like that was my room for improvement,” Ali said. “I just really wanted to work on that and stay focused.”

Ali’s determination paid off. After shooting a 48 on the back nine on Tuesday, she went out and shot a 41 on Wednesday.

After receiving her medal, Ali already had new goals in mind.

“I just want to keep increasing and getting better year,” Ali said. “Hopefully I can bring my team to state next year. The Top 2 would be nice.”

Ali first tried golfing with her sisters and her dad when she was in the seventh grade.

“We just went to the Wells course and started hitting buckets of balls,” Tom said. “One after another. We just worked on chipping. Chipping and putting. I said the other stuff will come and apparently it has.”

Tom said he is very proud of his daughter for her performance and is confident if Ali keeps working hard like she has, she will get another chance at state next year and maybe bring home a title.