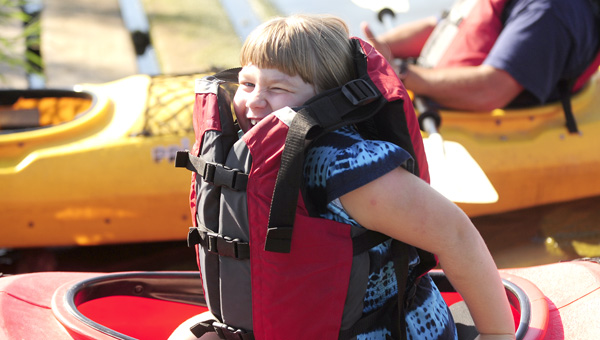 Diana Heine climbs out of a kayak at Edgewater Park on Tuesday. It was the first time Heine had ever tried kayaking. --Brandi Hagen/Albert Lea Tribune

A group that is oftentimes overlooked had a special opportunity to have an experience like every other elementary student during its summer school session on Tuesday.

The Success Room, which is for children who have an educational label of austism spectrum disorder at Lakeview Elementary School, took a bus to Edgewater Park to go kayaking with firefighters Trevor DeRaad and Scott Hanna, just like fifth-graders in District 241 did during the school year.

For the last five years, students in Albert Lea have had the chance to go kayaking, but this was the first time the Success Room got to go.

“It’s unique to have an experience where they get to do what all the other kids get to do and really enjoy it,” said Stacie Stensrud, a para educator who works in the Success Room. 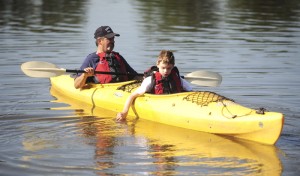 Scott Hanna takes David Bahr out in a kayak at Edgewater Park on Tuesday. The ride was a chance for the Success Room at Lakeview Elementary School to experience something other classrooms were able to experience during the school year. -- Brandi Hagen/Albert Lea Tribune

Stensrud said it actually worked out well for the class to go during the summer and not with the other fifth-graders.

“The more people that are around, the more taxing that gets for them because there’s a lot of input going on, and for them to process that is hard,” Stensrud said. “The less stimulating we can keep it, they’re going to enjoy it. They really truly enjoy lots of different experiences.”

The idea of taking the Success Room kayaking came from DeRaad because his son Phoenix is one of the students in the class.

“Water is a huge draw to these kids and normally they can’t do it safely,” DeRaad said.

He figured if Phoenix enjoyed the water and kayaking, the others might like it just as much.

The students were so relaxed while in the kayaks, they let their hands hang in the water and they were calm, some almost falling asleep.

Hanna said he couldn’t get the kids who normally talk a lot to say anything and those who were afraid of change were very giddy to be on the water.

He said David Bahr, who is nonverbal, clearly told him through signing that he was done being on the water, and Hanna said he understood right away and brought him back.

“For me personally, it’s very rewarding to put anybody on the water to give them the opportunity to experience something different,” Hanna said. “This is really special. You have kids that life in general is confusing, a struggle, a challenge and things are scary all the time. To get them on the water they just relax because the stimulation is very calming. The water and the kayaks take all the tension out. For a little bit, they were just enjoying today.”

While the students were on their kayaking adventure Hanna said they had the opportunity to see young wood ducks, some no more than two days old.

“These kids have just enjoyed the lake more than most adults in Albert Lea enjoy it all year.”

Stensrud said there were other activites planned in case the kayaking didn’t go over very well, but all 11 students gave it a try and behaved as they should have while getting in and out of the kayaks and while on the water.

Visit the Tribune’s website to see a gallery from the kayaking adventure.