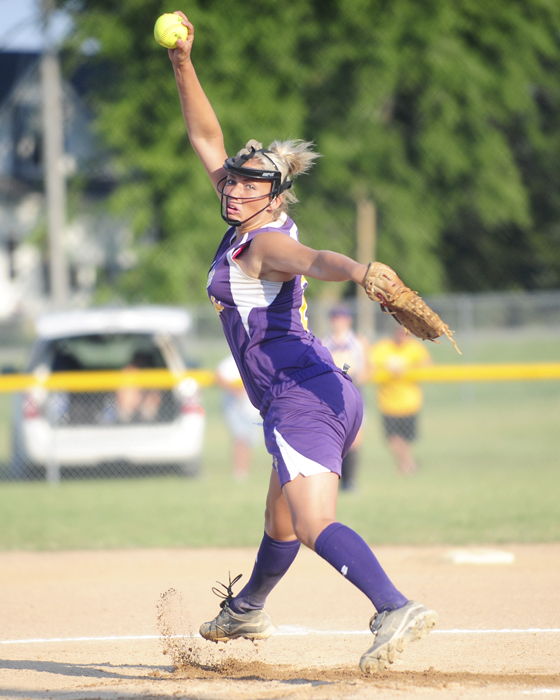 Josie Brackey throws a pitch during one of Lake Mills home games last week. Brackey has thrown a record of 346 strike outs in one season and a career record of 1,391 strike outs. She has been playing on varsity since she was an eighth-grader. --Brandi Hagen/Albert Lea Tribune

LAKE MILLS, Iowa — Josie Brackey threw more than 315 pitches on June 23, but the number doesn’t compare to her strike out statistics.

The records were previously held by 2007 graduate Megan Pederson.

As of Monday, Brackey had a season record of 346 strike outs and a career record of 1,391 strike outs. The numbers continue to climb as the Bulldogs finish up the season.

Brackey said she has made it her personal goal to have high strike out statistics because it’s something that only she can add to instead of other statistics where the team has an impact.

She said the only person that wants the records more than her is probably her dad.

“You have to put in a lot of time to be a good pitcher,” Bulldogs coach Sabrina Roll said. “She finds the time to go in and get that done.”

Brackey has been playing ball since she started playing in the kids leagues.

Now a graduate of Lake Mills, Brackey will be attending Iowa Central Community College at the end of August to continue her softball career.

Brackey said it’s going to be hard to leave, but she’s ready for the experience and ready to play on a team that excels at the sport.

Before she leaves though, she has another softball opportunity in front of her.

Brackey was nominated by Roll to play in the Iowa All-Star Game July 22 and 23.

Roll said she nominated her because she’s a great team player, is good at adjusting to changes and works hard throughout the entire year to improve her game.

Roll has confidence in Brackey as she moves on from the high school level.

“I think she’s going to do great,” Roll said. “Coming in as a freshman she’ll be at the bottom of the totem pole, but I think it will take her to the next level. She’s been ready for it for awhile.”