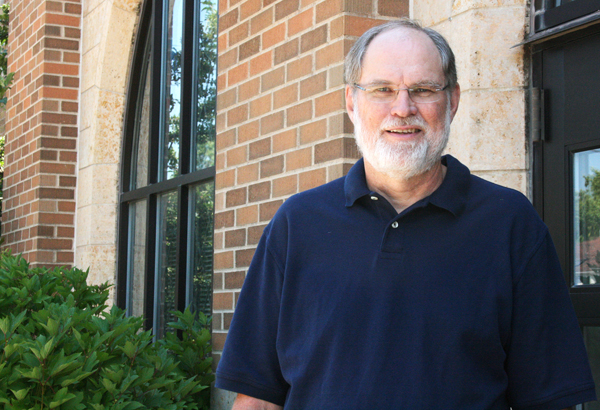 Joel Erickson, interim pastor at First Lutheran Church, stands in front of the church Monday afternoon. Erickson is filling in at the church, while a new full-time pastor is chosen to replace the Rev. Dan Baker. -- Sarah Stultz/Albert Lea Tribune

A retired Lutheran pastor who moved to Albert Lea two years ago has taken on a new call in ministry as an interim pastor at First Lutheran Church.

Filling in after the departure of the Rev. Dan Baker, the Rev. Joel Erickson began in June at the church. Erickson said he anticipates he will be at the church for a full year as a new full-time pastor is selected.

Other pastors at the church are the Revs. John Holt and Al Stoa.

“It’s really fun to be a part of,” Erickson said.

He noted he is focusing on healing and prayer ministries and has started a weekly prayer group Thursday mornings.

He has been a pastor for more than 30 years.

Erickson said he found out he wanted to be a pastor when he was a junior at St. Olaf College in the 1960s. A pastor had come to the college to recruit a group of students to teach a Sunday school class for a month.

Ironically, at the same time Erickson had started a group for any students who had doubts about their faith or who didn’t have a faith. The group gave an opportunity for people to learn about different faiths.

It was that group of about 40 students who finally taught the class.

“That was a turning point for many students,” he said. “I thought, ‘Wow, this is really something.’”

He said his first call came in 1973 to Scottsdale, Ariz.

Since then, he has also served in Salt Lake City, Urbana, Ill., Bloomington, Ill., and most recently at Grace Lutheran Church in Mankato.

He retired in September of 2009 and in August 2010, he and his wife, Pembie, moved to Albert Lea to be closer to his son, Jeshua’s family.

“The big draw was our son and daughter-in-law and grandkids,” he said. “But it seemed like a nice community.”

Since he has been here, he has joined the Daybreaker Kiwanis Club at the encouragement of his neighbors and has been able to meet many new people. He will be president of the group starting in the fall.

“Living in Albert Lea has just been a real blessing for us,” Erickson said. “There are really kind and wonderful people.”

He said he was asked by Holt to serve in the interim position and at first hesitated. But since it would only be part time, he accepted.

In his spare time, Erickson said he enjoys playing disc golf, learning to play the Native American flute, reading and spending time with his grandchildren.

Interesting fact: Erickson is the chairman of the board for the House of Hope, which provides intermediate level chemical dependency treatment.