Memorial  services for Albert “Al” Walter Jorgensen of Albert Lea will be at 1:30 p.m. Thursday at First Lutheran Church, Albert Lea. The Rev. John Holt will officiate. Military honors will be accorded by Albert Lea veterans organizations. Friends may visit with family from noon until the time of the service at the church on Thursday. 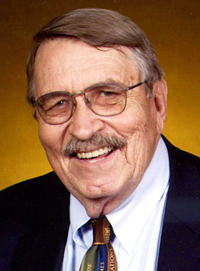 Al died on Sunday, July 1, 2012, at Rochester Methodist Hospital, following a brief illness. He was 71.

He was born on March 28, 1941, in Austin, the son of Albert Walter and Evelein (Karnetz) Jorgensen. Al grew up on the east side of Austin, later moving to a farm south of Austin. He graduated from Rose Creek High School with the class of 1959 and then received his associate’s degree from Austin Community College. Al served the country in the U.S. Army, having been stationed in Germany. Following his honorable discharge, he continued his education at Mankato Sate University. He married Susan Penne on June 7, 1968, at Bethlehem Lutheran Church in Mankato. In 1969 they moved to California, returning to make Albert Lea their home in 1972. Al returned to Mankato State University, obtaining his Bachelor of Science Degree in social studies in 1974. Al was an engineering and survey technician for Jones, Haugh & Smith and Zenk, Read and Trygstad in Albert Lea and then the Department of Transportation, St. Paul, from which he retired in 2007. He was a member of First Lutheran Church where he taught Sunday School and confirmation classes. He also was a member of Rotary Club and the American Legion. He enjoyed being an active participant in community theater and volunteering at the Albert Lea Library. He had many interests, which included card playing especially bridge, cribbage, and 500; reading, photography, and dining and spending time with friends and family.

Al had a great passion for travel and since his retirement toured England, Scotland, Italy, Paris, the South of France, Greece, Turkey, California and Florida.

He was preceded in death by his father Albert Walter Jorgensen; his mother Evelein Cole; his step-father Roland Cole; sister Judith Brewer; her husband Lee; and father-in-law and mother-in-law Floyd and Muriel Penne.