Matt Hundley, pastor at the Albert Lea Vineyard Church and a member of the AZ-One alliance, and volunteers from his congregation have pinpointed Mexico as their current missionary location. 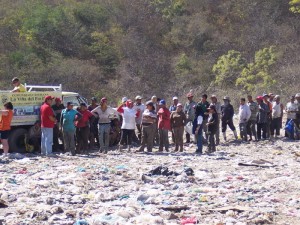 Dump scroungers line up to receive a meal. The Albert Lea Vineyard Church serves meals at the dump from their mobile kitchen on Thursdays and Saturdays while on their Mexico mission trips. -- Submitted

Although the church has sent a few teams to Guatemala and Colombia in the past, for the last nine years, the primary destinations of the Vineyard Church’s mission trips have been the sunny cities of Mazatlan and Reynosa, Mexico. The focus area is a part of the Golden Zone, where out-of-the-country tourists flock.

“Most of the churches in the country just have Spanish speaking services, but the Golden Zone is the only place that has a ‘gringo’ service,” Hundley said with a laugh.

The church volunteers meet up with missionaries that are there year-round. They own a mobile kitchen with a grill and sink where they make meals for the locals. The meal is usually accompanied by a time of singing, dramas, prayer and a small sermon.

One of the main components of the mission work is called the Dump Tour. The Dump Tour happens on Thursday and Saturday mornings. Volunteers take a bus to the dump to go help “dump scroungers,” or people who sift through garbage to find food. A future hope is to have shower buildings built at the dump site so the scroungers can clean up and change. 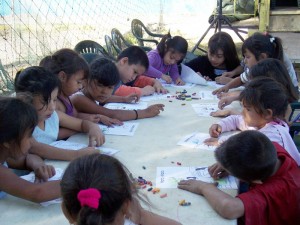 Children color pictures at a table in the shade. The Albert Lea Vineyard church brought a variety of supplies to Mazatlan and Reynosa, including shoes, hygiene products and other gifts.

One of the more recent projects was building a new community center that also serves as a feeding center in the area called Loma Bonita, or beautiful hill. It’s now developed into a living area with newly built homes after residents were forcefully removed from Tres Palmas.

More than 50 Vineyard churches from the Midwest are a part of the central Mexico partnership and make annual trips there.

“It’s been amazing to start off nine years ago with seven to eight churches and now have 15,” Hundley said of Vineyard’s church planting movement. “Our hope is to eventually enable the locals to establish their own churches.”

The crew brings things such as medical supplies, hygiene products and shoes. The kids stick their feet in cement and sizes are taken according to the imprints because their shoe sizes are constantly changing. The shoes are then stuffed with gifts and are usually a Christmas treat for the children.

Hundley explained that the biggest challenges of going to a foreign country is the danger areas. The Tolerance Zone is an area where corruption, such as prostitution and gang activity, is legal and rampant.

“It was such a blessing to have a translator who lived in the village, had formed relationships with the people and knew customs and culture,” Hundley said. “That opens a lot of doors.” 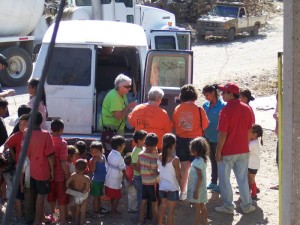 Kids line up outside a dump in central Mexico to be served. The Albert Lea Vineyard Church takes 4 to 13 volunteers on their mission trip each year.

The annual trips are usually about a week at a time and include four to 13 people.

“It’s nice to pick up where you leave off,” Hundley said of forming relationships with the locals.

The church is looking forward to their next trip in the latter half of January.