Despite a few rainstorms, Freeborn County’s drought status has worsened. 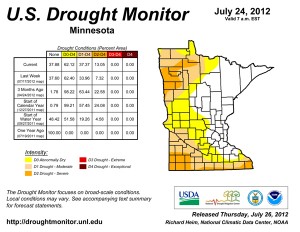 According to the U.S. Drought Monitor, the southern third of Freeborn County now is listed as in a severe drought, while the northern third is in a moderate drought. Only the far northeast corner in the immediate Blooming Prairie area is considered not in a drought. Yet that spot is considered abnormally dry.

The update to the drought is determined every Tuesday and released to the public every Thursday. The monitor is maintained at the University of Nebraska.

About 13 percent of Minnesota now is considered in a severe drought, with 37 percent in moderate drought.

Mower County’s southern tier of townships looks to be in severe drought, while most of the county is moderate, with a band of abnormally dry across the top tier.

In Iowa, Winnebago and Worth counties are 100 percent in severe drought. In fact, 28 percent of that state is considered in an extreme drought.

Even when it has rained, it has been sudden and brief. There is a 40 percent chance of thunderstorms for Albert Lea on Saturday night, and that rainfall could extend into Sunday, according to the National Weather Service. Cool air from the northwest could make temperatures more bearable. Temperatures will rise again later Sunday into Monday.