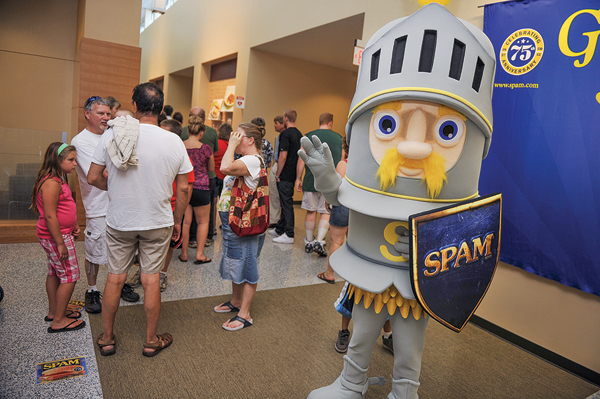 AUSTIN — Saturday in Austin was all about canned meat, Hormel Food Corp.’s new digs and a rock ’n’ roll legend. 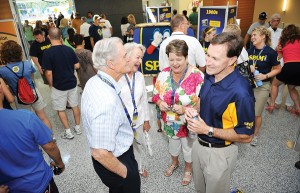 Hormel Corporation CEO Jeff Ettinger talks with Pat Ray, from right, and Richard and Nancy Knowlton in the lobby of the Hormel Corporate World Headquarters Saturday during the Spamtastic Grand Opening Expansion Celebration.

“That’s fantastic,” Hormel President and CEO Jeff Ettinger said Saturday about the attendance. “It’s hard to guess what you’re going to get as far as a turnout.”

The free event was highlighted with a performance by Rock and Roll Hall of Fame R&B/soul group The Temptations, which Ettinger said they decided to book after hearing them at a convention in Colorado.

“I love The Temptations,” Ettinger said. “We knew we wanted to have something special in terms of the open house. Once I heard the band I really thought that the kind of energy they bring and the great heritage and those wonderful songs would really be a hit.”

Former President and CEO Richard Knowlton, who was in attendance, said he loved what he saw from the expansion project and felt it put the company in a great position going forward. He also said he really enjoys Spam’s new promotions and its spokescharacter, “Sir Can-A-Lot.” 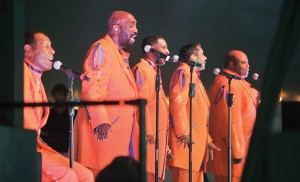 “I think that’s created great interest,” he said. “That’s a product that was behind its time … and now it’s fresh and it’s new. And now there’s a whole new segment of society that’s eating Spam, including the rest of the world.”

Ettinger said the celebration was as much about the community as it was about Hormel and Spam.

“Whether folks have visitors in town and take them to the Spam Museum or they’re going to show off their Spam recipes, or even when you travel, once you mention you’re from Austin, Minn., inevitably Spam comes up,” he said.

Joe Beine, of Austin, who was there with his four children, said it was a great day for the event. His 7-year-old daughter Allison enjoyed the children’s crafts booth, where she made a crown with jewels.

“It was a nice day, and we thought we should check it out,” Joe said.