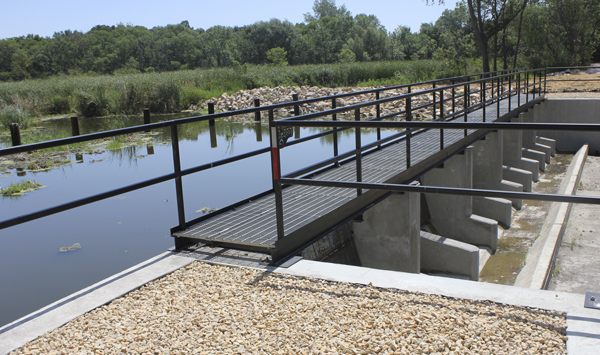 The Minnesota Department of Natural Resources completed work on the dam at the outlet of Bear Lake. The body of water is the source of Lime Creek, which flows south into Iowa. -- Tim Engstrom/Albert Lea Tribune

TWIN LAKES — Work on renovating the controversial dam at the outlet of Bear Lake finished earlier this month. 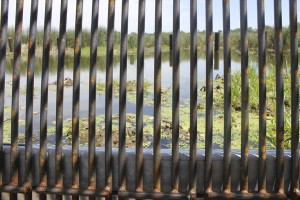 Bars are in place to prevent cattails from flowing over the dam. Many cattails near the dam have been cleared but the general south end of the lake is filled with them, and they block views of the open water.

The next step, according to Jeanine Vorland of the Minnesota Department of Natural Resources, is to update the wildlife management plan for the 1,033-acre lake.

How the lake is managed has been a point of contention, mainly with debates centering on water levels. The Freeborn County commissioners in 1996, 2002 and again in 2009 requested the DNR change its management plan, refrain from renovating or replacing the dam and to reclassify the lake. Since the 1970s, it has been classified as a wildlife lake, which allows the DNR to adjust water levels.

The lake came into existence in the 1910s when farmers wanted more pastureland and cropland. The existing dam, built by the Works Progress Administration, has been there since 1941, but the recent renovations make the dam nearly like it was new. Bear Lake is in Nunda Township about four miles west of the town of Twin Lakes. 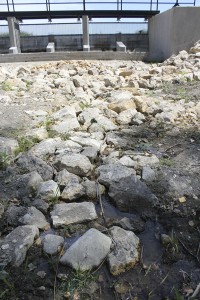 Water trickles through the rocks below the dam, even though the water level is not at the dam. Whether this is a leak or a spring is debated.

Work on the variable-crest dam began in December. Vorland, the area wildlife manager, said it hadn’t been renovated since 1978. She said the apron was in good shape but much of the dam had to be replaced and eroded areas along the earthen berm adjacent to the dam were repaired. The renovated dam and adjacent overflow routes allow the DNR, she said, to bring the water down more swiftly, when necessary.

The man who owns the land along the dam, Don Yost, is a farmer, too. In fact, he fought in court the blanket easement by which the DNR accesses and maintains the dam, eventually coming to an out-of-court stated agreement on the access rights. He said Tuesday that water is a precious resource for the cropland around the lake and doesn’t understand why the DNR would ever want the lake to be shallow.

Yost, when pointing Tuesday at where green corn becomes yellow corn as the ground increases in elevation, said the drought would’ve caused crop damage but it wouldn’t be as bad if the DNR had not lowered lake levels over the winter to repair the dam.

“Why let the water go into Iowa?” he asked.

Vorland said regardless of any issues, the dam needed to be fixed so it didn’t wash out. The original plan called for work on the dam over the winter, then that work was to stop in time for the spring snowmelt flood, with work to resume in the fall. However, there was no snowmelt flood, so the contractor was able to keep working.

The price tag for renovating the dam was $556,600, with the revenue coming from dam-repair dollars the Legislature approved in the 2008 bonding bill. Ducks Unlimited provided design and engineering assistance.

Vorland said the DNR will get input from Freeborn County officials and a local group of stakeholders in setting the management plan for Bear Lake. She said the water is in poor condition from an ecological viewpoint.

“It was frustrating to watch it deteriorate,” she said.

The lake, which drains into Lime Creek, is low now because of the drought cycle; however, it normally has an average depth of 2 feet, with a maximum depth of 3 1/2 to 4 feet, she said. 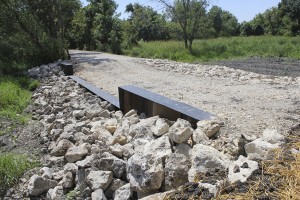 The DNR built a low spot in the road that accesses the dam at the outlet of Bear Lake. The low spot allows high lake water to flow into Lime Creek instead of waiting to flow over the dam.

Yost worries about the condition of the dam. He said there is a leak beneath the apron but was told by a DNR official that there is a spring under or near the dam. He said 28,000 acres feed water into Bear Lake, meaning the water can rise swiftly. He said he has concerns about cattails clogging the dam, causing the water to cut channels across his land again and lowering water levels. He noted low spots dug into the earthen berm on each side of the dam.

Yost also noted Bear Lake’s status as a wildlife lake has been a point of controversy for decades. He said a management plan calling for deeper water would be better for wildlife, fish and for nearby farmers.