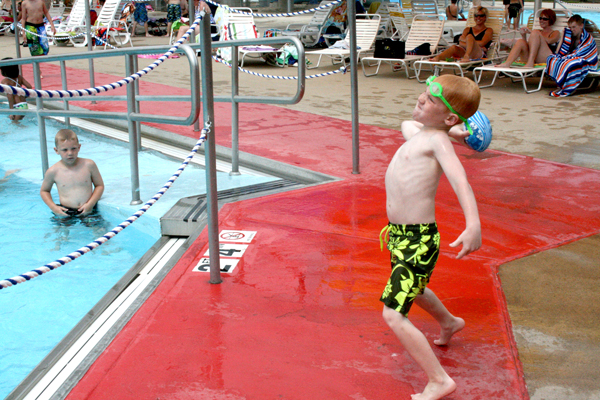 Alden Dobberstein, 5, winds up to throw a foam football to some friends in the Albert Lea city pool Thursday. -- Sarah Stultz/Albert Lea Tribune

A warning of excessive heat that has hovered over the Midwest this week finally reaches its end today, according to the National Weather Service. 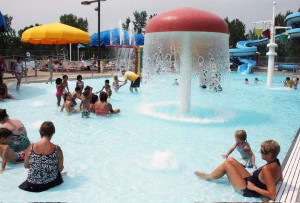 The heat warning, at least for southern Minnesota, comes to an end at 7 p.m. However, it’s not going to happen without breaking more records today. Meteorologists say a front near the Iowa border moves north into central Minnesota today, bringing southerly winds and sultry air.

“Temperatures will climb into the 90s with heat index values from 102 to 112 degrees across the warning area,” the National Weather Service states.

OK, what about the cooling?

Overnight, northerly winds are expected to return as a cool front moves through the region, meteorologists say.

“This will return temperatures to near their normal early July levels in the lower to mid-80s along with much more comfortable humidity,” the National Weather Service states.

The weather agency forecasts a high for Albert Lea today of 99 degrees, with a heat index of 110. It says high temps starting Saturday and into next week will be in the 80s.

All this week, pools in Albert Lea and in the small towns in the region have been packed with families seeking relief from the heat. Albert Lea reached a high of 90 on Thursday. The record high for July 5 was 97, set in 1982.

The National Weather Service issued excessive-heat warnings Thursday for all of Illinois and Indiana, as well as parts of Iowa, Minnesota, Wisconsin, Missouri, Kentucky, Ohio and Michigan. Forecasts called for daytime temperatures from the mid- to high 90s into the low 100s.

St. Louis hit a record high of 105 on Wednesday and a record low of 83. In Wisconsin, the coolest Milwaukee and Madison got was 81 in the early morning, beating previous low records by 2 and 4 degrees respectively. Temperatures didn’t fall below 79 in Chicago, 78 in Grand Rapids, Mich., and 75 in Indianapolis.

“When a day starts out that warm it doesn’t take as much time to reach high temperatures in the low 100s,” said Marcia Cronce, a meteorologist with the National Weather Service. “You know it’ll be a warm day when you start out at 80 degrees.”