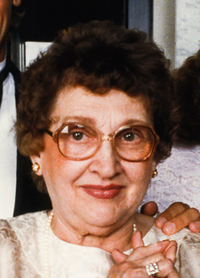 Funeral services will be at 11 a.m. Wednesday at Emmons Lutheran Church in Emmons, with the Rev. Julie Fiske officiating. Burial will be in Oak Lawn Cemetery, rural Emmons. Visitation will be from 5 to 8 p.m. Tuesday at Mittelstadt Funeral Home, 902 E. Main St. in Lake Mills, and will continue one hour prior to services at the church on Wednesday. Memorials may be directed to the Emmons Lutheran Church.

Bernice Lillian (Ferley) Iverson was born on Nov. 24, 1918, at Silver Lake, in Worth County, Iowa, to parents Peter and Thea (Heltne) Ferley. She was baptized by Rev. A. C. Brena on Dec. 25, 1918, and confirmed by the Rev. Hans Fosness on May 14, 1933, both at Silver Lake Lutheran Church. She attended country school in Hartland Township, Worth County, Iowa.

Bernice was united in marriage with Franklin Edwin Iverson on Dec. 21, 1941, at the Emmons Lutheran Church parsonage by the Rev. O. T. Storasasli. Frankie passed away on May 9, 1984. During World War II, Bernice lived with Frankie for three months during the summer of 1944 in Manitou Springs, Colo., before he went “overseas.” The following summer, Bernice lived with him in Temple, Texas, while he was stationed at McClasky General Hospital recuperating from being shot while stationed in the European Theatre. After Texas, Bernice and Frankie lived in Emmons, where she was a wife, mother, and homemaker.

Bernice was a member of the ELCW (Emmons Lutheran Church Women), its Mission Circle, and on the Altar Guild for approximately 30 years.

Bernice was very well known for her sticky rolls. She loved to give them away; they were the best! She spent much time in her garden, taking pride in the canning and freezing she did to provide for her family. Some of her specialties were watermelon pickles, dill pickles, and all sorts of jams and jellies. Bernice also loved to work with flowers and watch the various sporting events her children and grandchildren were involved with.

Our family has been blessed to have shared in her life.