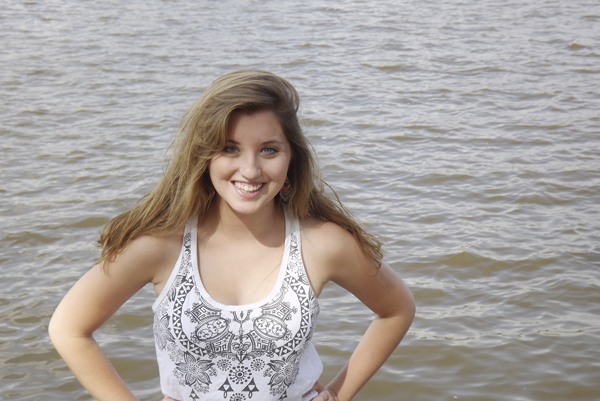 Chrissy Reindal, 17, acts in local plays, commercials and was an intern for a low-budget film this summer. -- Kessa Albright/Albert Lea Tribune

ALDEN — After playing the lead role in “Annie” when she was in fourth grade, Chrissy Reindal knew she wanted to be an actress. 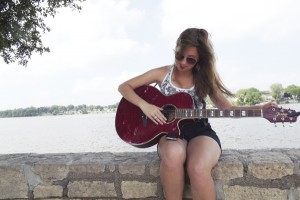 Chrissy Reindal tunes her guitar before playing “Wonderwall” by Oasis alongside the shore of Fountain Lake in Albert Lea.

“After the show I told my mom, ‘This is what I want to do,’” Reindal said.

Reindal, a senior at Alden-Conger High School, takes advantage of any opportunity to showcase her acting talents.

When she was 15, Reindal started taking acting classes. Her first class taught how to get into show business. She took headshots and sent them to talent agencies in the Twin Cities area. Reindal’s agency is the Non Union Talent Service Ltd. in the Twin Cities.

She also took acting classes with Twin Cities acting teacher Michelle Hutcheson. One class was an adult intensive class that taught about film acting. Another class she took with Hutcheson was with younger kids, and one of her classmates auditioned for “Diary of a Wimpy Kid” and made the final cut but wasn’t selected for the film.

Hutcheson referred Reindal to an internship for a low-budget film for a week in July. The film will not be released in theaters. The main goal of low-budget films is to give young actors something to put on their resume.

On the set, Reindal helped with wardrobe, makeup and was an extra with some improvisational lines. Throughout the internship she learned about what goes on behind the camera and what looks good on film.

“I learned a lot,” Reindal said.

Reindal is no stranger to the worlds of film acting.

She has auditioned for several commercials and starred in two. Her first commercial was for thrift store Moss Envy. Last week she starred in a commercial for Physicians Neck & Back clinics. The commercial aired on KARE 11 at 10:16 p.m. Friday.

“Get ready for stardom,” an email to the actors from the director of the commercial said.

After auditioning for a role in a Best Buy commercial, Reindal experienced rejection. The directors decided to go with a family with a different look for the commercial.

“Commercials are more about how you look,” she said.

Reindal was mistress of ceremonies last year for the Alden-Conger High School talent show along with a classmate. The two improvised the entire show. Reindal is familiar with improv from taking classes on it. “Saturday Night Live” is one of Reindal’s favorite shows, and she dreams to be sketch actor on the show in the future. Her knowledge of improv and stage acting would be useful for performing on the live show.

She played the role of Marty in her school’s production of “Grease” this year. Reindal enjoyed starring in the production to showcase her acting and singing talents. Her character had a solo.

Reindal plays guitar and sings covers of popular songs on her YouTube channel under the screenname “creindal15.” Over the past year she has recorded 16 cover videos and one original song called “Toes.”

“It’s fun to experiment with the music and kind of make it my own,” Reindal said.

Though she is a triple threat with her stage acting, film acting and musical talents, her main goal is to get into the film acting business.

Los Angeles is where most actors go to make it into the film industry, according to Reindal. She hopes to make it there after completing college in Minnesota to be close to home.

“I’m just trying to make something of my life,” Reindal said.

Interesting fact: Reindal was in youth wrestling when she was 4 years old and, as she said, “actually won.”