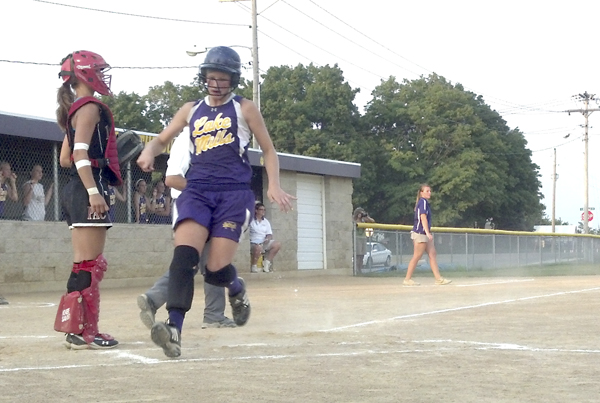 At the start of the second half of the third inning the scoreboard remained bare as neither team was able to get a hit or reach base. It seemed the game was going to come down to throws from the two pitchers.

In the bottom of the third though, Bulldogs’ pitcher Josie Brackey was the first batter up and was walked to first. The girls behind Brackey got hits and made plays around the bases to put up a couple runs for the Bulldogs.

“I told them we’ve got to wake up our bats a little bit, and they did,” Lake Mills coach Sabrina Roll said.

After holding Pocahontas to three batters in the top of the fourth the Bulldogs kept up the streak and a hit by Brackey sent Jurnee Peña and Carlie Christenson to home. The play was followed by a double hit by Randi Dilly to send another girl home.

At the end of the fourth Lake Mills had a 6-0 lead over the Indians.

“After we put the ball in play once it just seems to keep on rolling,” Roll said.

The Bulldogs had prepared for the showdown by going to the West Fork and Pocahontas game the night before to see what they would be up against.

Roll said the team picked up some pointers on the Indians’ pitching and defensive styles.

“Going into the game we were a little weary because sometimes with too much information then the girls are thinking too much,” Roll said.

It didn’t seem to phase the Bulldogs though as they held the Indians to zero.

“I told the girls, now we’re going into post-season. We didn’t go up and then plateau off with our improvements. We’re continuing to climb and that’s what you’ve got to do throughout the whole season,” Roll said.

She said the girls played a good game and all they need to do for their game against North Union tonight is to keep their bats alive and keep the defense tough.

She had no worries about how the team will play and knows she can count on Brackey and Kelcey Srp, the catcher, to do their jobs after their performance on Thursday.

The Bulldogs will face North Union in the semi-finals tonight with the game set to begin at 7 p.m.