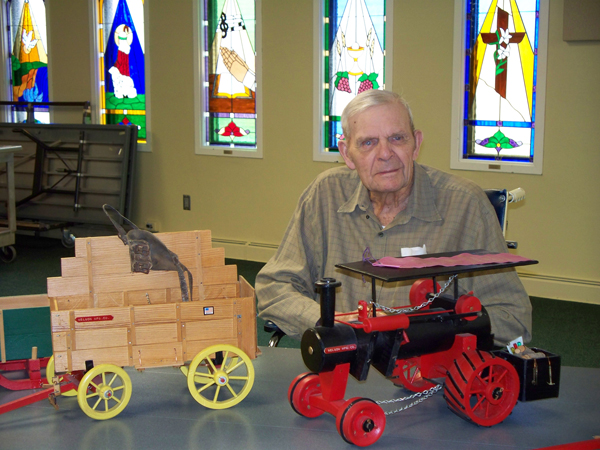 Norval Nelson poses with some of his creations. He carves wood into tractors and machinery that he used to use while farming. -- Submitted

A 97-year-old Albert Lea man has quite the artistic hobby. 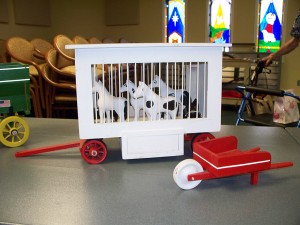 One of Norval Nelson’s creations includes this wagon trailer with animals inside.

Nelson was born in 1915 and grew up on a farm where he started driving horses at 8 years old. In the 1980s Nelson retired from farming and found wood carving was a fun way to occupy his time.

His carvings are modeled after the farming and transportation equipment he used growing up. Nelson has made different types of wagons: lumber, water and even a circus wagon with hand-carved animals inside. His steam engine won a grand champion ribbon at the Freeborn County Fair in the 1980s.

One of his creations is a school bus that was pulled by horses in the winter like a sleigh.

He wanted his children and grandchildren to see some of the antique machinery that he grew up with so he created them from wood. According to his daughter-in-law Carolyn Nelson, Norval has always had an interest in wood carving.

“He would find a piece of wood you and I would call it a scrap of wood, but he’d make something of it,” Carolyn said. Nelson has even made a harness for a carved horse out of one of his wife’s old gloves.

So far Nelson has created about 35 pieces of art from scraps of wood over 34 years. His son, Richard Nelson, helped him by cutting the pieces of wood, and Nelson would piece the wagons together himself and carve the wheels.

All six of Nelson’s grandsons have a handmade wagon and some of his granddaughters have kiddy cars.

Nelson’s work was displayed in the chapel at St. John’s Lutheran Home last month for about two hours. Residents from both buildings came to admire his handy work.

The loss of Nelson’s eyesight caused him to stop making his wagons.

“He had a corner in the basement where he would work. There was saw dust all over!” said Norval’s wife, Helen. “Those were the days.”