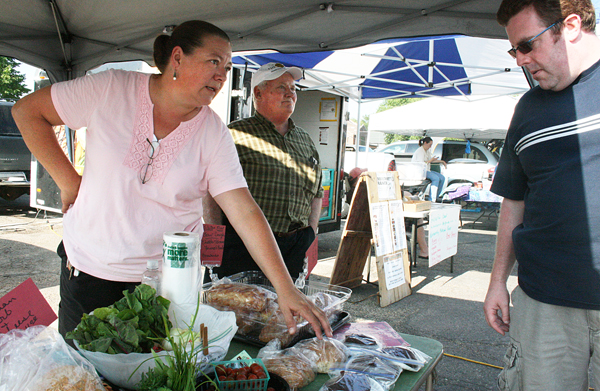 Austin woman Jennifer Lomack, left, talks with Seattle resident Chris Campbell Saturday at the Albert Lea Farmers Market about some of the gluten-free items she sells at the market. -- Sarah Stultz/Albert Lea Tribune

One Austin woman is taking her love of gardening, combined with her skills in the kitchen, to start a business that goes to three area farmers markets. 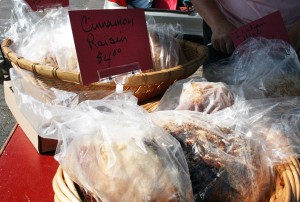 Set up in the Albert Lea Farmers Market Saturday — under the business name of 24 Karot Gardens — Lomack is beginning to become known at the market.

Though she is still one of the more relatively small vendors, she hopes to expand in the future.

Lomack said she recently moved to Austin from St. Paul to help her parents and needed to find a job. With gardens in both Austin and St. Paul, she thought she would try her hand at selling her produce. She has grown more than 80 varieties of small fruits and vegetables at her St. Paul garden and more than 40 varieties in Austin. 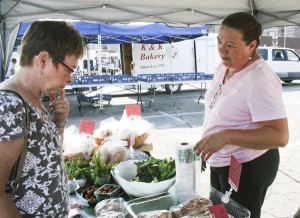 Beth Erickson, left, inquires about some of the gluten-free breads at the stand of Jennifer Lomack Saturday at the Albert Lea Farmers Market.

To go alongside the produce, Lomack started making artisan breads, which have become a big hit at the Albert Lea market. She began with varieties such as sourdough and Italian herb and cheese, and has since expanded to cinnamon raisin, garlic tomato basil and parmesan garlic.

She said she can’t keep enough of the garlic tomato basil on hand.

She has also developed a niche for gluten-free breads and brownies.

One of those people, Beth Erickson, was picking up a loaf of sourdough gluten-free bread.

“We need somebody to make these,” said Erickson, whose husband has a gluten allergy. “It’s a big deal.”

“For those who have to, there’s a very limited market,” Lomack said.

Lomack also has a small community supported agriculture business with six members, in which the members pay a fee at the beginning of the season, and then each week, or as otherwise arranged, the members get a share of her produce.

“It helps the local economy, develops a relationship with your grower and you know where your food is coming from,” she said.

She hopes to develop this part of her business in the future.