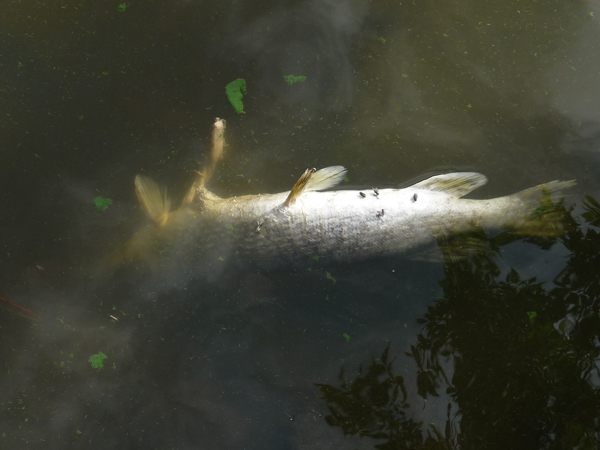 Dave Villarreal, president of the Fountain Lake Sportsmen’s Club, said the high heat combined with the shallow waters in each of the lakes during the last week have decreased the amount of oxygen, which ultimately led to the demise of the fish. 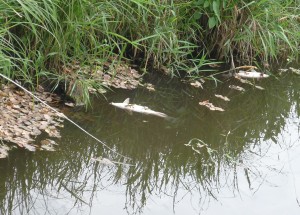 Northern pike could be seen floating at the surface of Wedge Creek Saturday.

Northern are some of the most susceptible to the heat, Villarreal said.

“The one thing we really need right now is a cool rain,” he said.

Anderson said he was out early Saturday on his boat on Fountain Lake and then out again later that day with his grandchildren. He said he counted 233 dead fish all over the lake.

Estimates of dead fish on Geneva Lake are in the “tens of thousands,” Villarreal said. Dead fish are also being reported on Bear Lake.

There were no reports of dead fish on Albert Lea Lake.

Villarreal said one of the main reasons the fish are dying on Fountain Lake is because the lake is so shallow. While there are some areas that are more shallow and some that are deeper, the average is about six feet deep.

“We need to get this lake dredged,” he noted.

Until this happens, there is a potential of more and more fish dying.

The Shell Rock River Watershed District and the city of Albert Lea began pushing for funding to dredge Fountain Lake during the most recent legislative session but to no avail.

Villarreal said it is frustrating to see the fish die after he and other Department of Natural Resources work to repopulate the lakes with fish each year. People have been catching northern as long as 41 inches, which before this year has been almost unheard of, he noted.

“I hate to see all this effort go to waste because it’s so shallow,” Villarreal said. “The deeper the lake is, the better chance they have of surviving.”

He said the club will be pushing to get the lake dredged.

Look to a future issue of the Tribune for more information about the fish on Geneva Lake.