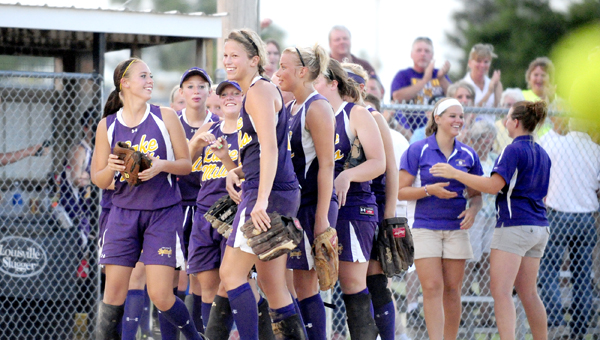 The Lake Mills softball team was all smiles after Friday’s regional semi-final game against North Union.

SWEA CITY, Iowa — The unranked Lake Mills softball team knocked off the No. 1 ranked team in Class 2A, North Union, on Friday with a 9-7 win.

Before scoring eight runs in the bottom of the fifth to take the lead, the Bulldogs were trailing 7-1.

“That was a little nervewracking,” Bulldogs coach Sabrina Roll said. “I gave the girls a little pep talk. I feel like a lot of the times I tell them what I need to hear. I told them there’s seven innings for a reason, and you play all the way till the end and see what happens.”

“The game of softball doesn’t care who’s the better team on any given night,” Roll said. “You never know what’s going to happen.”

Roll said she strongly believes the game isn’t just about physical ability, but also the mentality of a player. The team proved her right.

After a pep talk from Roll and the assistant coaches, the girls pumped themselves up and got their heads back into the game.

“When it’s time to go big or go home, the girls would rather go big,” Roll said.

The Bulldogs will advance to the final round of regionals scheduled for Monday. The team will travel to Algona to take on Emmetsburg at 7 p.m. Emmetsburg won its game against West Lyon on Friday 5-1.

Once again Roll has told her girls to just get ready to play Lake Mills softball. It doesn’t matter the level of play.