The funeral service for Dora Rebecca Levine of rural Albert Lea will be at 2 p.m. Saturday at Central Freeborn Lutheran Church, rural Albert Lea.  The Rev. Bob Berthold will officiate. Interment will be in Hayward Cemetery. Visitation will be from 5 to 7 p.m. Friday at Bonnerup Funeral Service Albert Lea and one hour before the service at the church. 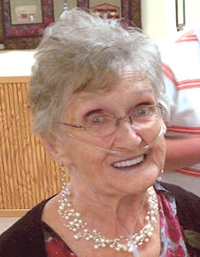 Dora attended a one room school house in Hayward until the eighth grade and later attended Albert Lea High School. Dora met Paul Levine at a “free show” and afterward went on her first ride on his green Harley. Their love-at-first-sight led to marriage on Nov. 18, 1950. Soon after their marriage, Paul enlisted in the Air Force and they moved to Georgia. In 1955 the family moved back to Hayward where they were members of Hayward Lutheran Church. In 1965 the growing family moved to rural Albert Lea. Dora shared 47 years in this home with Paul and their family where they were members of Central Freeborn Lutheran Church. For approximately 20 years Dora worked at Land-O-Lakes, but especially enjoyed being a wife and mother. Dora loved music and enjoyed singing. She also played the guitar, violin, banjo and piano. Dora was a competitive card-player, known for her grilled chicken and for attending every activity that her children and grandchildren were involved in. Dora was blessed to have 61 1/2 years of marriage with Paul.