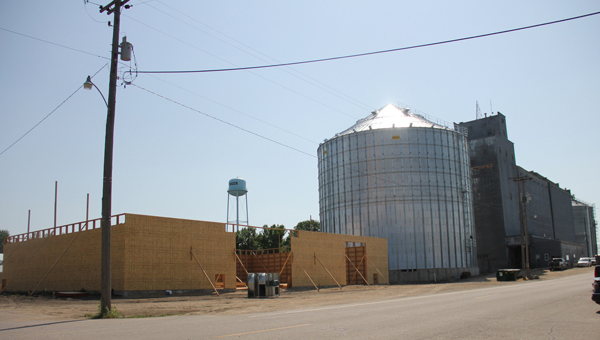 Northern Country Cooperative in Conger is building a new warehouse next to a brand new bin that can hold about 435,000 bushels. -- Kelli Lageson/Albert Lea Tribune

CONGER — Residents of this town have seen a local business double in size this summer.

The Northern Country Cooperative started construction in May on a new bin and warehouse. Branch Manager Tom Troska said the business had been piling corn on the lawn for the past few years.

“With the increased acreage going up around here our existing warehouse wasn’t big enough,” Troska said.

Their prior capacity was about 480,000 bushels, and Troska said they’ll almost double that with the new bin that can hold 435,000 bushels. Along with a new 80-foot by 120-foot warehouse, the project is expected to cost about $1.5 million.

“Farmers want to market their grain,” Troska said. “It will be nice to have this storage for them and they can pick which month they want to sell it in.”

He said beans will still go in the current elevator, but he’s excited to have the storage for corn so they won’t have to worry about getting it off the ground before snow falls. The construction work will be completed before harvest, Troska said.

Troska said that the Stacyville, Iowa-based company has 13 locations including the Conger one. Other close locations include Emmons, Alden and others around southern Minnesota and northern Iowa. Upgrades are also being done at the company’s other locations. Conger’s location is at 66873 180th St. in Conger. It can be reached at 507-265-3231.