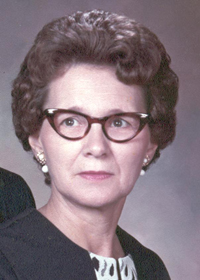 Conner Colonial Chapel, 1008 First Ave. South, Northwood, is in charge of the arrangements.

Esther Grace Nelson was born on Sept. 13, 1922, in Lyle, the daughter of Christan and Nelena (Johnson) Stromley. Esther attended rural country schools near Northwood. She was united in marriage to Raymond Nelson on Feb. 16, 1940, in Northwood. Raymond preceded her in death on Sept. 7, 1986. After their marriage Raymond and Esther farmed around the Deer Creek and Lyle area.

Esther enjoyed her flower garden, raising chickens and baking, but her great love and enjoyment was her children, grandchildren and great-grandchildren.

She was a member of First Shell Rock Lutheran Church and the church circle.