Memorial services for Esther Tostrud Hanson, of Albert Lea, will be at 11 a.m. Wednesday at the First Lutheran Church in Albert Lea. The Rev. John Holt will officiate. Interment will be in Hillcrest Cemetery. Friends may visit with family one hour before services at the church. 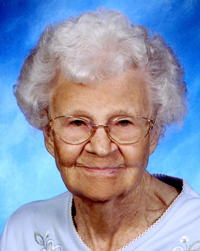 Esther Julia Lewison was born Sept. 8, 1915, the sixth child of 10 children born to homesteaders Ole and Irene Lewison, in Bowman County, N.D. Her struggle with old age ended peacefully on July 14, 2012, at Thorne Crest Retirement Community, which had been her home for the past three years.

Esther and her best friend sister, Hilda, left North Dakota during the depression to find work in Owatonna, which was where there father was born and where they had many cousins. It was there that she met Irvin Tostrud and was married in Waukon, Iowa, on March 10, 1937.

Esther and Irvin settled in Albert Lea in 1941, where Irvin worked for his Uncle Emil Olson for over 40 years.

They parented three children who survive: Demita  (Dee) Westrum  of Sun City, Ariz., Delores (Robert) Schultz of Owatonna and Milt (Linda) Tostrud of Rochester. She is also survived by three grandchildren; three great-grandchildren; her sister Hilda of Glendale, Ariz.; and her brother Bud of Bowman, N.D.

She was preceded in death by her son-in-law, C.G. “Bumper” Westrum; four brothers and three sisters.

Esther started working at Skinner-Chamberlain in 1957 when Irvin suffered his first heart attack. She continued working there through the transition into Herberger’s, retiring in the ‘‘80s. Esther belonged to First Lutheran Church for 71 years. She was a longtime Circle member, served as a Sunday school teacher and also participated in the Altar Guild for many years.

When Irvin died in 1975, Ralph Summers taught Mom to drive. A truly amazing feat! The years after that, she sprouted wings and was able to travel extensively with her family and friends, of whom she had many.

In 1991, she married longtime family friend, J.W. “Bill” Hanson. Mom and Bill had 18 happy years together before his death in 2009. Two stepdaughters survive: Sandee King and Susan Wiggins, both of Florida. Mom lived a long, happy and fulfilling life. We feel blessed to have had her as long as we did.

Join us in blessing her memory at First Lutheran Church.