Funeral services for Eugene T. Parrish of Albert Lea will be at 11 a.m. Friday at the Grace Lutheran Church in Albert Lea. The Rev. Todd Walsh will officiate. Visitation will be from 4 to 7 p.m. Thursday at the Bonnerup Funeral Service, and one hour prior to the service at the church. Interment will be in Graceland Cemetery. 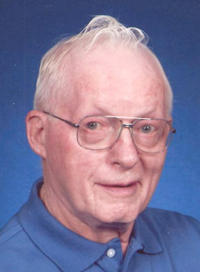 Eugene was born Aug. 27, 1927, in Waseca, the son of Eugene J. and Katherine A. (O’Neil) Parrish. He attended country school and Waseca High School. On Dec. 1, 1948, he was united in marriage to Mavis Anna Hanson at the Trinity Lutheran Church in Owatonna.

Eugene was raised on a farm in Waseca County and had been employed by the Wilson Company in Albert Lea for 33 years. Gene loved all sports but especially softball and baseball. He played on the Wilson Co. league. Eugene was a member of the Eagles club and his hobbies included woodworking, fishing, playing cards, dancing, dice games and playing yard games with family. He loved spending time with the grandchildren and great-grandchildren and family vacations by the lake.