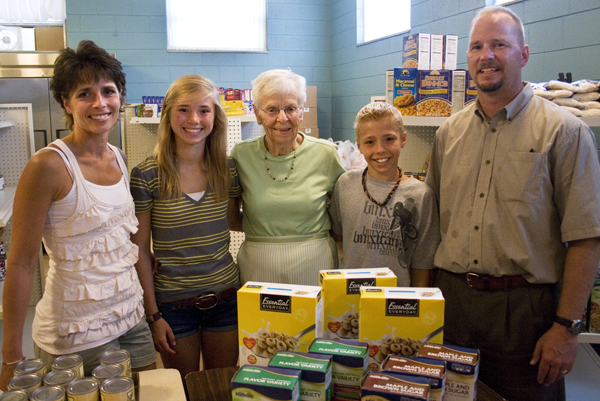 Arlene Egerdal, center, former director and volunteer with the Ecumenical Food Pantry, stands with Vicki, Haley, Culley and Mike Larson. Over the past five years, the Larsons have made it a family project to collect and donate food to the food shelf. -- Sarah Stultz/Albert Lea Tribune

With a little fun and some dedication, one Albert Lea family is striving to make a difference.

In the last five years, Mike and Vicki Larson, and their two children, Haley and Culley, have collected more than 1,000 pounds of food to give to the Ecumenical Food Pantry.

The idea started in 2008 when the family bid on and won an evening with DJ Jacob Abrego of Uptown Sound, Mike said. They decided to have a party and invite their family and friends to attend.

To come to the party, however, people were encouraged to bring a bag of groceries.

Vicki said the first year, there were 144 pounds collected.

“I think it’s great to have a family do something like this,” said Arlene Egerdal, former director and volunteer of the food pantry.

Vicki said the family had volunteered in the food pantry previously and enjoyed it, so they decided to stick with it.

Each year after all of the food is collected, the family brings it in, weighs it and sorts it out.

“I just love being able to help people because we’re fortunate to have what we do,” said Haley, 14.

Egerdal said the food pantry serves 200 households a month. This equates to about 600 people and 8,000 pounds of food.

The food the family brought in this year helped about nine families.

Vicki said she hopes her family’s story inspires others to help out an organization they support.

“Find a creative way to get your kids involved,” Vicki said. “Find an organization you’re passionate about, and then get your family involved. Get your friends involved.”