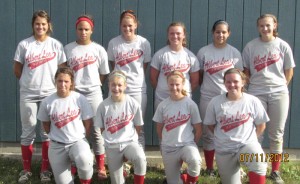 The Albert Lea U16 fastpitch softball team, which competes in the Southern Minny League based out of Austin, finished their season with a 7-6 come from behind victory over the host Austin Packer team on July 12. The girls started the season off slow with a 2-4 record, but finished the season with a 17-6 record; second in their league. The girls also competed in a Cannon Falls Tournament where they finished 2-1. Players in the back row from left: Caycee Gilbertson, Dom Villarreal, Lynzee Underdahl, Sadie Burnett, Veronica Silva and Kassi Hardies. Players in the front row from left: Megan Kortan, Haley Harms, Lindsay Reim and Sara Sanderson. The team was coached by Dan and Heather Harms, Karol Hansen, Rick Harves and Susan Kortan.