Funeral services for Florence Ruth Ferguson, 99, of Albert Lea will be at 10:30 a.m. Friday at Bayview/Freeborn Funeral Chapel. The Rev. Kent Otterman will officiate. Interment will be at Geneva Cemetery. Visitation will be from 5 to 7 p.m. Thursday at Bayview/Freeborn Funeral Home and one hour prior to the service. Online condolences are welcome at www.bayviewfuneral.com. 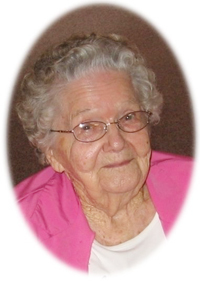 Florence Ruth Ferguson was born on May 13, 1913, in Claremont, to Franklin and Lucy (Chubbic) Dennis. On Nov. 24, 1933, Florence was united in marriage to Ross Ferguson. The couple lived on a farm in Newry Township where Florence enjoyed being a homemaker and helping out on the farm. She was a member of the United Methodist Church in Geneva and later in Blooming Prairie. After Ross’ death, Florence moved to Albert Lea. She enjoyed crocheting and knitting, gardening and reading. Florence enjoyed many winters in Arizona, traveling and time spent with her family. Blessed be her memory.

Florence was preceded in death by her parents; husband, Ross; five sisters; and seven brothers.