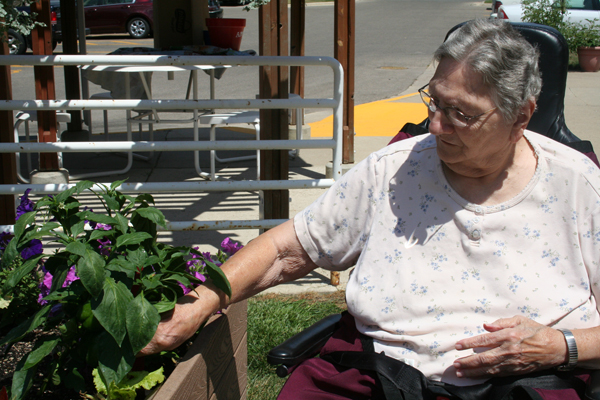 Georgia Nyenhuis is more active than most women her age. She is 82 years old and has been living at St. John’s Lutheran Home for seven years. Her time is spent by knitting, coloring, word puzzles and gardening.

Georgia Nyenhuis poses next to her raised garden of green beans and purple flowers. Nyenhuis said that gardening relaxes her.

Nyenhuis is paralyzed from the bust down and gets around by wheelchair.

Ten years ago she was working on the farm with her son when she was injured. They were unloading corn from a bin to a wagon. Her son went to turn off some equipment in the trailer and left Nyenhuis to turn off the auger. An auger is a farming machine used to drill holes in the ground. Nyenhuis got caught in the machine by either her scarf, jacket or hair.

She thinks she was in shock after the accident.

The accident left her paralyzed from the bust down, and her hair was torn from the back of her head. She gets around well in a wheelchair after going through physical therapy. Her hair has grown back too.

Nyenhuis has had strong faith her entire life. She grew up south of Hayward with six siblings. One of them died as a baby, one at 12 and one three years ago of cancer. Nyenhuis goes to Catholic church service every Sunday and reads Christian books in her spare time.

Her hobbies are more than just something to keep her busy. She learned how to knit from one of the workers at St. John’s. Since then she has knit about 30 caps for her grandchildren and great-grandchildren.

She is going to display some of her work at the Albert Lea fair this August. She pulled two caps from her drawer and said she can’t decide whether to display a bright red one or one that’s different shades of blue.

She also colors pictures similar to ones in coloring books for children. The color by numbers coloring pages are much more complex than a children’s coloring page, though. Nyenhuis received a blue ribbon at the Albert Lea fair last year for one of her colorings.

Gardening is Nyenhuis’ favorite way to spend her days. Growing up on a farm Nyenhuis is familiar with planting crops.

Every year about 20 members of Nyenhuis’ family get together to make sauerkraut. They gather 400 pounds of cabbage then make the sauerkraut and divide it amongst the families.

St. John’s Lutheran Home has had a gardening program for its residents for six years. There are about 10 residents who participate in the program, but Nyenhuis is the only one actually involved in the committee to plan gardening events.

“It’s like therapy for me, I think,” Nyenhuis said.

She said gardening is very relaxing for her. Since many residents are in wheelchairs they usually use raised gardens for the crops and flowers. Outside the chapel entrance there is a garden full of vegetables and flowers the residents have planted. These gardens are on the ground so the workers have invented a system to make it simple to plant seeds. The workers dig a hole then the residents drop the seed in the hole through a PVC pipe then the workers cover the hole and go over it with a hoe.

Nyenhuis looked at her raised garden in the St. John’s Lutheran Home yard with pride. She finds solitude in her many hobbies.

“She makes the best of her situation,” said Activities Director Diane Wichmann.