Grad returns to A.L. to speak at banquet 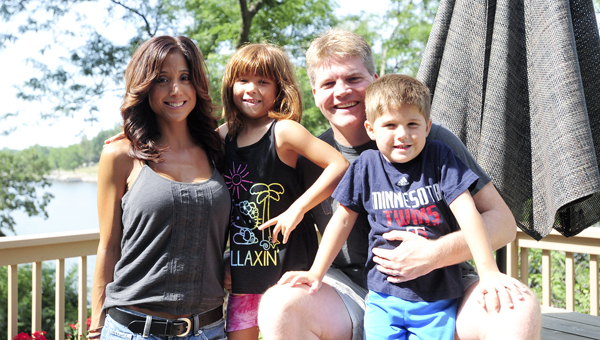 Eric Nyquist poses for a photo with his family at his parent’s home in Albert Lea. From left: Nyquist’s wife, Michele, daughter, Charlee, and son, Hudson. --Brandi Hagen/Albert Lea Tribune

Nyquist now has an established career working as the vice president of strategic development for NASCAR.

Prior to this job, Nyquist worked for the Chicago White Sox and held a position as the manager of business planning for the National Football League.

As a 1990 graduate and football player from Albert Lea High School Nyquist had always dreamed of having a career in sports, but said never in a million years would he have imagined being where he is today.

“My ball could have bounced any which way,” Nyquist said. “I’m just a fortunate guy.”

After finishing his undergraduate degree at Carleton College in 1994, Nyquist started applying at law and business schools.

He went on to complete the business and law programs at the University of Chicago at the same time.

While attending school in Chicago, Nyquist drove his Geo-Metro back and forth to Albert Lea to coach the 10th grade football team.

Still trying to pursue a career in sports, Nyquist started putting the pen to paper in his spare time.

He wrote between 1,000 and 1,500 letters in four years to everyone and anyone he could in the sports world to get his name out.

He said most of them went unanswered and he was quite disappointed, but he kept trying.

“Failure is the key to growth,” Nyquist said. “I bet dollars to donuts, I have failed more times than virtually anyone that reads this. My list of failures is legendary.”

Not to say he hasn’t had success. While the letters didn’t always get a response, he was heard.

The former Vikings owner Roger Headrick, one of the letter recipients, passed Nyquist’s name on to NFL President Neil Austrian when a position opened up in 1998.

Nyquist’s hard work paid off, and he landed his first job in sports as the NFL’s manager of business planning.

After two years with the NFL Nyquist’s career furthered as he moved on to being the executive vice president of business operations with the Chicago Bulls and the White Sox.

In 2005, Nyquist took his current job with NASCAR.

Nyquist said he really enjoys his workplace because the atmosphere is a “check your ego at the door” kind of place.

According to Steve Phelps, NASCAR’s chief marketer and a good friend of Nyquist’s, Nyquist has helped to transform the business aspect of NASCAR and has brought a part of Albert Lea with him.

“That’s a very enduring thing about Eric,” Phelps said. “He doesn’t change who he is. He’s the same guy whether he’s talking to our chairman or to someone in the mailroom.”

With his position, Nyquist has been able to help with several fundraising and charitable efforts to help many people, mostly women and children.

“If I was worked as a lawyer or a banker, I wouldn’t have the opportunity to do the things I have been able to do for other people,” Nyquist said. “Honestly that’s the single most rewarding part of my career in sports.”

He spent the last week in Albert Lea with his parents as he was asked to be the guest speaker at the Albert Lea High School Hall of Fame that took place at Wedgewood Cove Golf Club on Saturday.