Funeral services for Harry J. Johnson, 93, of Albert Lea will be held at 10 a.m. Friday at Salem Lutheran Church. The Rev. Mark Neithammer will officiate. Interment will be in Hillcrest Cemetery. Visitation will be from 4 to 6 p.m. Thursday at the Bayview/Freeborn Funeral Home and one hour prior to the service at the church on Friday. Online condolences are welcome at www.bayviewfuneral.com. 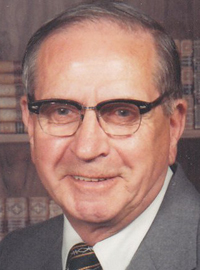 Harry J. Johnson was born on July 10, 1919, in rural Lake Mills, the son of Alexander and Caroline (Drugsvold) Johnson. He was baptized at the Vinge Lutheran Church in Vinge, Iowa, and was confirmed at the Zion Lutheran Church in Lake Mills in 1933. Harry grew up in Lake Mills and went to country school and high school there. On May 3, 1942, Harry was united in marriage to Donna May Helland at the Emmons Lutheran Church. He was retired from Almco where he had worked as a shearer and a machinist. Harry was an active member of Salem Lutheran Church, having served as an usher, a member of the SOS Committee and a member of the church council. He enjoyed woodworking, doing crafts, walking, watching ball games, camping and especially loved watching Wheel of Fortune. Harry was a very kind, patient and loving man. He loved his family and his church both very dearly. He will be remembered for his wit and soft heart. Fond memories will be treasured forever by those who knew and loved him.