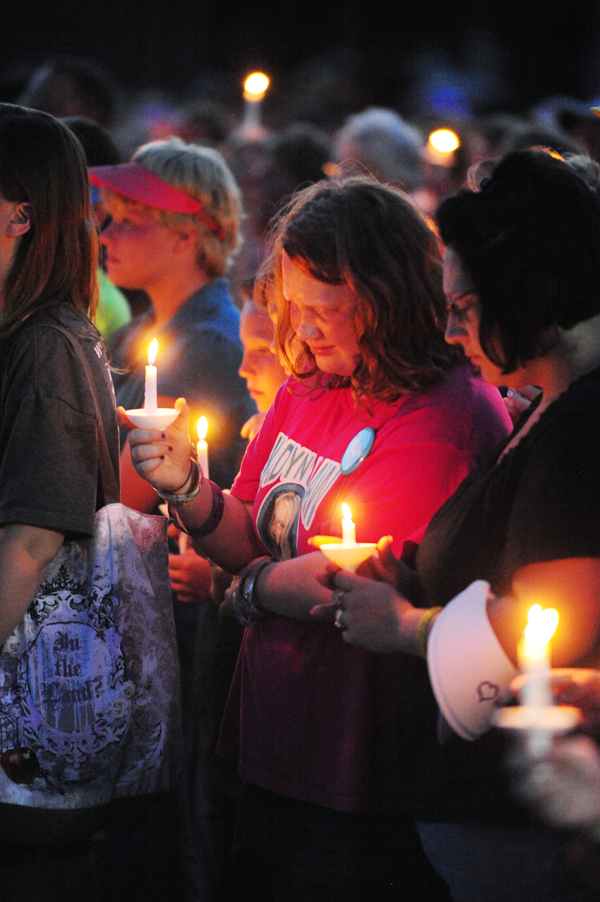 NORTHWOOD — With hugs, words of comfort and many tears, hundreds of people in this small community banded together Wednesday night to remember the two young girls killed in a crash Tuesday near Hanlontown.

In the courtyard near Northwood-Kensett Elementary School’s playground, at least 400 family members, friends and community members gathered in memory of Cassidy Stehn, 9, of Northwood, and Hana Riedinger, 12, of Kensett, Iowa.

The girls died Tuesday morning after the driver of a minivan they were riding in reportedly ran a stop sign and was broadsided by a semi at the intersection of Worth County Road S28 and Iowa Highway 9. They were headed on a canoeing outing on Clear Lake as part of a Worth County Conservation Board program.

“All of us in the Northwood-Kensett School community are deeply saddened by this tragedy, and our deepest sympathies go out to the families,” said Northwood-Kensett Community Schools Superintendent Tom Nugent.

As of Wednesday night, a third girl in the van, Destiny Bruce, 10, of Northwood, remained in critical condition at St. Marys Hospital in Rochester, and Hailey Schaefer, 11, of Northwood, was expected to be released Thursday. Maeghan Petznick and Jaela Parks, both 10, of Northwood, have been treated for injuries and released.

“All of us feel this terrible tragedy clear into our bones,” said the Rev. Wendy Gillan of Northwood United Methodist Church. “It has been a difficult time for all of them as you can imagine.”

Gillan was one of about five pastors to lead the candlelight vigil Wednesday outside the school.

The pastors read scriptures, offered prayers and lead the group in lighting the candles. They prayed for the families of those who had died, for the girls who were injured and their families, for the emergency workers who responded to the crash and even the drivers of both vehicles.

Some clasped their loved ones as the prayers were offered while others cried.

Afterward, the pastors encouraged those in attendance to visit and support each other.

One of those people in the audience was seventh-grader Grace Skellenger.

Skellenger, a close friend of Hana’s, said the two became friends when they were in second grade.

“She was nice and loyal and she was smart,” Skellenger said.

She said Hana enjoyed playing sports and being with her friends. They were slated to enter seventh grade this fall.

Skellenger and another handful of young girls could be seen wearing colored visors with “Hana” written on them. Skellenger said she made them because Hana was always wearing a visor.

Skellenger’s mother, Shelly, said news of the crash has been “devastating.”

She said she and her daughter were at home Tuesday when they received a message telling them about what had happened.

At first they thought it was a joke, but then they found out otherwise.

“Grace has such a big heart,” the mother said. “It’s going to take a while for this one.”

Cole Estes, who was in the same class as Cassidy at school, said she enjoyed telling jokes and liked to make others laugh.

They were slated to begin fourth grade together this fall.

Northwood-Kensett kindergarten teacher Diane Hanson said it has been difficult for her to put into words what she has been feeling since hearing of the crash.

Hanson said Cassidy and Hana had both been in her kindergarten class.

“I am heartbroken,” she said. “They were both eager learners and quick to smile and laugh. They made friends easily and were fun to have in class.”

The teacher said the families of both girls are active in the school.

“I am sure the friendship, love and laughter they experienced here on earth will go with them as they become two of heaven’s newest angels,” Hanson said. “Their light will shine forever in our hearts.”

The Tuesday crash was the second time in a little over a year that tragedy struck the small north Iowa community. Last May, 7-year-old Kadyn Halverson of rural Kensett was struck and killed by a pickup as she walked across a gravel road to board her school bus.

“It just makes you want to hug your kids tighter,” said Northwood resident Tammy Estes. “You never know when something might happen.”

Cassidy’s funeral is scheduled for 10:30 a.m. Saturday at First Lutheran Church with visitation from 5 to 8 p.m. Friday.

Hana’s funeral is scheduled for 1 p.m. Sunday at the church, with visitation from 3 to 5 p.m. Saturday.