Hunt for man with shotgun ends 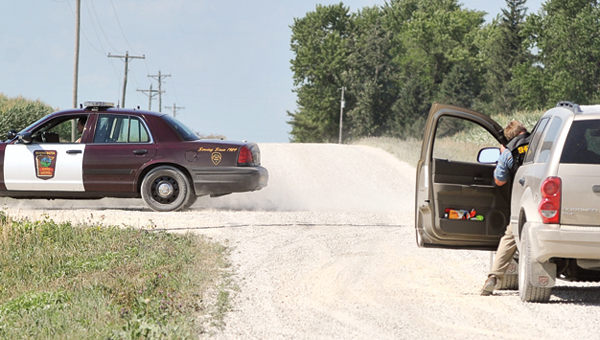 A Minnesota State Patrol trooper drives past Mower County Deputy Sheriff Mark May as authorities searched for Brian Jansen Wednesday afternoon, the suspect in a domestic altercation at a residence on 130th Street, Mower County near the Mower/Freeborn County line. Jansen was allegedly armed with a shotgun.

LYLE — A three-hour manhunt for a suspect with a loaded shotgun ended Wednesday with police dispatching an ambulance and the Mayo One helicopter.

Authorities allegedly found Brian Jerome Jansen, 42, at a farm near Lyle wielding a shotgun, according to the Mower County Sheriff’s office. Authorities ended the situation at about 5:40 p.m. and sent an ambulance and the Mayo One helicopter for Jansen. 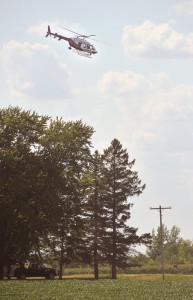 A Minnesota State Patrol helicopter hovers over a cornfield where it was believed that Brian Jansen was hiding, after he was involved in a domestic altercation near 130th Street, Mower County near the Mower/Freeborn County line Wednesday afternoon.

According to Mower County Sheriff Terese Amazi, Jansen was shocked with a Taser and arrested. She could not confirm if he was shot.

Jansen was treated at the Mayo Clinic Health System in Austin for an undisclosed injury and has been released, according to a Mayo spokesperson. Amazi added Jansen has been put in jail.

The manhunt began around 2:45 p.m., and authorities soon surrounded a London cornfield and a State Patrol helicopter fleeced the area. Police believed Jansen was hiding in a field on 130th Street in Mower County near the Freeborn County line and carrying a shotgun loaded with slugs.

Authorities said Jansen allegedly got into a domestic dispute and grabbed the gun.

Officers from the Mower County Sheriff’s Department, Austin Police Department, Minnesota State Patrol and a Department of Natural Resources conservation officer all collaborated in the search.

The Bureau of Criminal Apprehension and Mower County Sheriff’s Department have yet to confirm more information.