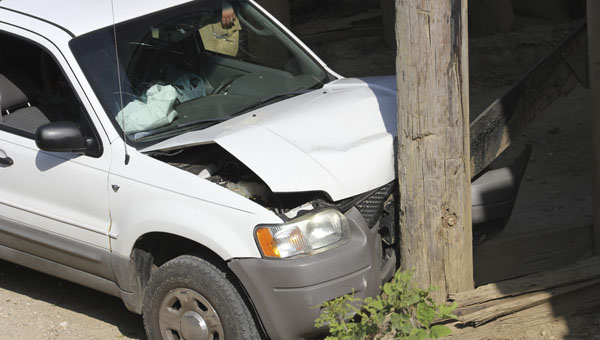 The front of a 2002 Ford Escape smacked into a railroad trestle Wednesday. A careful inspection of the windshield shows cracked glass where the driver and passenger hit their heads. They were not wearing seat belts. -- Tim Engstrom/Albert Lea Tribune

GLENVILLE — Two young men were spotted performing fishtails with a sport-utility vehicle Wednesday afternoon but eventually crashed into a railroad trestle near the Glenville Beach.

Driver Brady Lloyd Koller, 20, and passenger Christopher Robert Hernandez, 20, were not wearing seat belts and ended up smacking their heads on the windshield. Both were placed on stretchers by emergency medical technicians with Mayo Clinic Health System in Albert Lea and transported by ambulance to the emergency room. 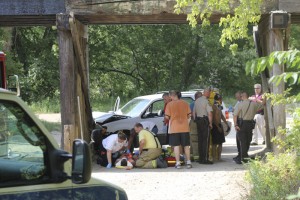 The deputy said the two men were southbound on gravel 800th Avenue and intentionally making the rear end of their white 2002 Ford Escape fishtail. They came upon a woman pedestrian who told deputies they stopped fishtailing and as they passed her Hernandez stuck his head out the open window and smirked at her.

The woman continued on her walk and found the Escape crashed into the trestle that supports the Cedar River Railroad, a subsidiary of the Canadian National, where it crosses over gravel 795th Avenue.