Lake to be treated for algae again

Signs of algae buildup — which contribute to a pea green color — are beginning to be seen in a few areas of the lake, including Dane and Bancroft bays, where algae on Friday was floating on the surface. Water from the bays flows into the main body of the lake. 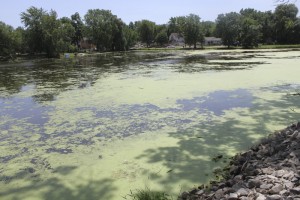 A large amount of algae on Friday covers the western third of Dane Bay, an area of Fountain Lake that doesn't get stirred up by boats. A creek feeds directly into the bay at Shoff Park without going through the helpful filter of a marshland, which often can prevent lakes from turning green. -- Tim Engstrom/Albert Lea Tribune

Albert Lea City Manager Chad Adams said city staff had initially planned to treat the lake twice with copper sulfate before the Fourth of July. With copper sulfate, a naturally occurring inorganic salt, only half the lake can be treated at a time, and treatments must be 10 to 14 days apart.

The first treatment came June 22 and covered Edgewater Bay and some of the lake near the Hatch Bridge.

On Monday, however, staff decided not to treat the lake for a second time right away and chose instead to wait until before the regional waterski tournament at the end of the month, Adams said.

Staff were using leftover chemicals from another year for the treatment.

“We also believe that if present conditions persist — i.e., hot weather and no rain — that the lake will be turning green again, potentially soon,” Adams said.

In the past, the treatments have lasted for several weeks; however, based on the weather and other conditions, there is a risk they may last a much shorter period.

Whether the lake will be treated in future years remains a question for the Albert Lea City Council, who will ultimately decide whether to purchase more of the chemical.

The question of whether to treat Fountain Lake for excessive algae has been the center of much controversy in recent years. The issue comes up each year around Independence Day and questions whether focus should be placed on temporary appearance or on overall water quality improvements that may be longer-lasting.

Shell Rock River Watershed Administrator Brett Behnke said algae is a natural element in the lake, but with the lack of rainfall and temperatures in the 90s, the algae blooms have become prevalent.

Behnke said while he does not oppose treating the lake, he hopes to look into other more long-term plans. He noted he is looking into funding sources for dredging the lake, which will make a large difference.

The Watershed District and the city applied for state funds for the project this year, but did not receive funding.

Behnke said Dane Bay, which is only two to three feet deep, is high with sedimentation and an excess of nutrients that have come throughout the years through flooding, farming practices and geomorphology.

These conditions, coupled with high heat and a lack of rain, causes the algae to have increased growth.

“With the existing phosphorous and sediment in the lake, coupled with this year’s early warmth, extended heat and lack of rain, the lake turned green rather early,” Adams said.

Scott Hanna, coordinator with Albert Lea Community Education, said when he is leading a group in canoes on the lake, he encourages them to promote a healthy use of the environment.

“Treatment makes it really nice on the holidays, but I think you’re just kind of covering up a symptom that the watershed is working hard to treat,” Hanna said.

Regardless of the current question, Hanna said Fountain Lake is showing indications of improvements from the Watershed’s work in previous years. He noted earlier this summer a fisherman caught a 20-pound northern pike. Pelicans are also congregating on and around the lake. These improvements in wildlife show a healthier lake, he noted.