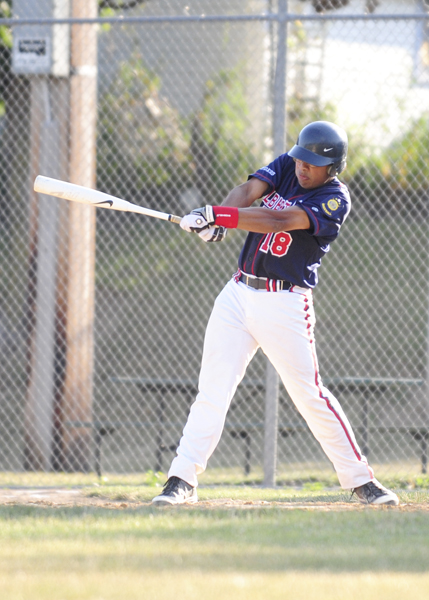 Houston Sharpe takes a swing at the ball in the second inning on Thursday against Northfield. In the bottom of the sixth Sharpe hit a three-run double for the Tigers. -- Brandi Hagen/Albert Lea Tribune

The Albert Lea Legion came back to win its home game against Northfield on Thursday 11-10 after scoring eight runs in the bottom of the sixth.

The Tigers were trailing after the top of the inning 10-3. 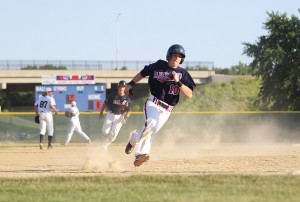 Jonathan Fleek and Connor Kortan round the bases after a hit by Cole Sorenson in the bottom of the fourth.

Houston Sharpe picked up four of his five RBIs in the sixth after batting twice. The first time Sharpe was up he hit a ball deep into right field to send Carter Kortan home.

The second time he was up to bat Sharpe hit a three-run double to clear the bases and give the Tigers the lead and the win.

Prior to Sharpe’s big hit, Cole Sorenson hit a two-run triple in the bottom of the fourth that sent Jonathan Fleek and Connor Kortan home.

“Overall it was a good win and a bad win at the same time,” Albert Lea coach Jay Enderson said.

The Tigers were forced to play four pitchers during the game against the River Rats, two of whom haven’t pitched for the Legion all year.

Derek Burkhard picked up his second win of the season.

“He did what he needed to do,” Enderson said. “He’s a guy that’s 2-0 on the season. He pitched one pitch in one game and he pitched two innings here. He’s got two wins because he’s came in at opportune times.”

Enderson said the pitching situation wasn’t what the Tigers had hoped for because they are scheduled for five games over the next five days.

“It’s going to be a challenge,” Enderson said. “Pitching is always an issue. We really didn’t want to use Cole Sorenson tonight, but when you’re up 11-10, how many chances do you get to win a game when you’ve been down 10-3 in the sixth?”

He said Albert Lea hit the ball really well, but were poor defensively in many areas.

The Tigers will play in the Gopher Classic at Irondale High School beginning on Friday at 3:30 p.m.