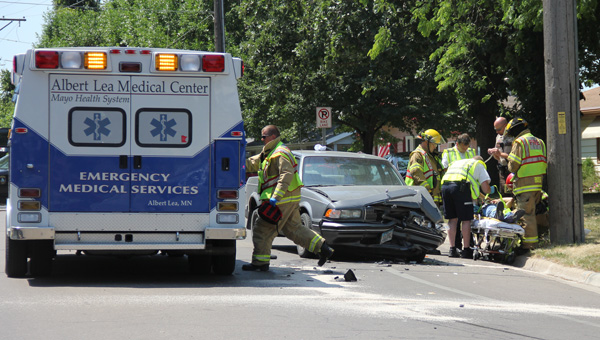 A man was injured in a head-on crash Saturday afternoon on Front Street in Albert Lea. -- Kelli Lageson/Albert Lea Tribune

A man was injured in a two-car crash Saturday afternoon on Front Street.

The Albert Lea Police Department reported the man, 35-year-old Charles Wangsness, of Lake Mills, was transported to Mayo Clinic Health System in Albert Lea and released after being treated.

It was unclear the extent of the man’s injuries, but he was treated by the ambulance crew from the Albert Lea hospital. Initial reports said the man had hit his head on the steering wheel. 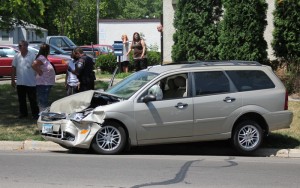 The man was driving a gray 1992 Buick Century four-door car. He was driving eastbound on Front Street when his car crossed over the center line and hit a 2007 Ford Focus station wagon

driven by 58-year-old Linda McCulloch, of Albert Lea, according to the Albert Lea Police Department.

McCulloch was also treated and released from Mayo Clinic Health System in Albert Lea.
The cause of the crash, authorities said, was distracted driving. The crash happened around 2:20 p.m. near 928 Front St.