A 21-year-old Albert Lea man was arrested Saturday night following an alleged stabbing at City Beach, according to the Albert Lea Police Department. 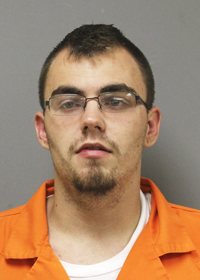 The alleged victim is Ehric Barnes, 21, of Albert Lea.

According to police, an officer went to lock up the skate park at City Beach at 10:36 p.m. when he noticed two men shaking hands and appearing as if they had been in an altercation. Roberts and Barnes denied being in fight, and the officer sent them on their way. Roberts went in one direction and Barnes left in another, accord to police.

Two other people came by, and the officer asked them if they had witnessed a fight. They, too, denied that an altercation happened.

Soon, Barnes returned in need of help because of a stab wound in his abdomen. He hadn’t realized he had been in a fight, according to Albert Lea police.

“He thought he had been hit hard,” said Lt. Jeff Strom of the Albert Lea Police Department, in describing the incident report.

A county prosecutor will determine if also Barnes faces a charge as a result of the alleged fighting. Strom said the injuries were deemed not to be life-threatening.